Collective Exhibition: On The Flip Side

ESPRONCEDA > Sin categorizar > Collective Exhibition: On The Flip Side

The collective exhibition will be presented on the occasion of the Art Nou Contemporary Art circuit. Espronceda ERBA-ESA Prize, under the direction of Savina Tarsitano in collaboration with the director of the Brussels academy Enzo Pezzella, reaches its 6th edition, as a pilot project to create new alliances in the art world, and on the other hand, to investigate the need of time for reflection and research for emerging artists. Giving them time to find their artistic language, without the influences of the art market or external pressures.

The prize aims to act as a bridge between the academic world, the art centre and the galleries to reflect together on the need for greater collaboration both for the quality of the projects and to enhance collaboration and human values.

The project with the University of Fine Arts of Barcelona was born thanks to the success achieved with the University of Brussels. The exhibition is an example of collaboration, where the young artists confronted themselves, the space and their own artistic language. The works created were born in an interaction with the city and the place, where the 4 artists have created new works challenging themselves, with the elaboration of new concepts. The project is curated by Savina Tarsitano.

Art questions itself, searches, creates links with the outside world, society, the invisible, and the conscience. What we observe and experience every day is perceived by the artist as a moment of waiting, contemplation, observation, reflection, criticism and intellectual growth. There are no answers but only questions. The exhibition “On the Flip Side” leads us to explore the four parallel and infinite worlds, the different eyes that observe reality, themselves, their own unconscious, the territory with a unique perception, with a three-dimensional image, a superimposition of thoughts and questions. Realities multiply infinitely to lead the viewer into the labyrinth of the unconscious, the invisible and social issues. The four emerging artists cross the boundaries of their being, challenging fatigue, and their comfort zone to come out with their conscience, vision without fear and limits going beyond borders: this is what art needs, becoming visionaries, narrating what others do not see, transforming an element of everyday life into a story, a question, a dream, a time machine, a monument into a reflection, a territory in an identity. As Edgar Degas said: “Art is not what you see, but what you make others see.”

We are surrounded by symbols, objects that narrate the identity of a place, that lead us back to being children, which leads us to challenge society with its technology, the limits of our being, but with the freedom to express our own opinion. As Salvador Dali wrote: “Art is made to disturb, science to reassure”.

The work of Alizée LOUBET which opens to the dialogue on the identity of a territory, in particular that of Barcelona. A simple balcony, a curtain, a common element in the Mediterranean, becomes for Alizée a moment of discovery and questioning not only of the territory and culture of Barcelona but on the concept of identity, independence, pushing it to the world of football, among the colors of a Catalan flag, to a tent on the balcony, to a ball that contains the identity not only of a place but of an entire culture. A football field that is transformed into a place of dialogue, of social integration where borders are broken down. She allows herself to be transported by the territory, to port areas, in areas bordering among center and periphery, to dismantle and reconstruct the borders, wondering about the cohesion of cultures, of identity with a colorful mosaic of traces of footballs. While Juliane Lusson’s work leads us into architecture and culture. Observing the territory from another angle that of the monument, transforming it into a matter of reflection and research. The monuments also reflect the identity, the mirror of the greatness of man, creating boundaries, distances between man and place. Juliane not only challenges her own borders but the monumental ones, bringing the monument back to a human dimension, captures it, reshapes it, cages it, reduces its dimensions to wanting to stop time, to slow down the race of the man, of the same life through the poetic images and stories. She does not destroy the beauty but rather recomposes it, accompanies it with visual elements, light figures of nature, poetics of existence alternating miniatures and colors, as in a fairy-tale world where everything is still possible. On the contrary, Emir Gómez Farah’s work challenges technology, the unconscious, and the invisible through the materials, the use of imagination, and of natural elements lead us into a parallel dimension where everything is transformed. Where every form is molded with his own unconscious and imagination, the latter now almost forgotten, no longer influenced by a bombarded world of images and alterations of reality. Therefore Emir almost challenges technology, but with a dialogue and not with denial. Instead by extending his hand to enter into the virtual world of each of us. He tells us about spirituality and the three-dimensional nature of an object, of the gravity of space without temporal limits of our thinking, an installation, a rock that becomes a place not only for admiration but a weariness of our presence, a selfie with ourselves.

Teresa W’s work leads us into the intimacy of thought, a journey between past, present and future, a vision of hers, a dream that leads her on a time journey, holding out her hand to enter the spiral of life with her. The dream and the vision leads her to explore the territory outside Barcelona, ​​abandoned places to discover a Tobogan, which has also become an architecture, a monument of the place, losing its game functionality to transform itself into a time machine. Teresa crosses the existential boundaries in the recreation of a spatiality, an overlap of reality, between writing and images to question ourselves. To also question ourselves on the spiral of our existence, to return to children, to re-become adults and project ourselves into the future. Between the lines of her story, vision, and traveling with oneself in parallel dimensions without fear of changing the rhythms of time.

You can check the catalogue of preview editions here. 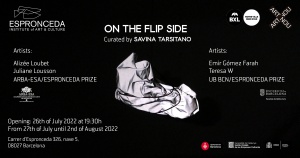 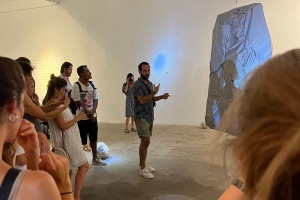 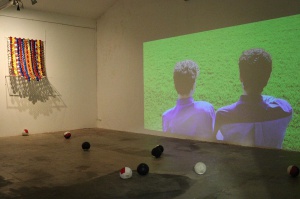 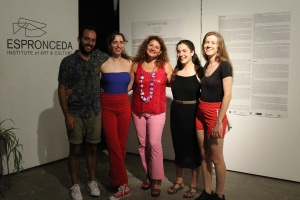 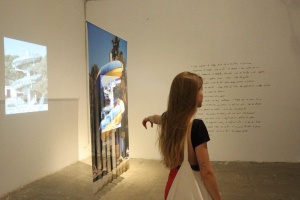 The Light of the Stones – Talk with Savina Tarsitano