Dialogue between Theatre and Visual Art’ was born from the collaboration between visual artist Savina Tarsitano and poet and theater writer Albert  Mestres together with the young theater company, La Decimonònica. The
idea was putting the theatre inside the art gallery and the art inside theatre spatial code. Tarsitano and Mestres met each other in 2005 as winners of thebBogliasco Foundation Scholarship based in New York and in the Ligurian town of Bogliasco. Over the years their artistic friendship continued and they were able to explore different ways of collaborating with each other, creating   a bridge between the world of theater, poetry, and visual arts, thanks to the support of Espronceda who has been hosting the project since 2017. In said year, they decided to present the first edition with the aim of bringing theatre into a contemporary art center and introduce the public to this bond between poems and visual art translated into installations, photographs, and paintings made by Tarsitano. The dialogue within the arts world is of fundamental importance to explore the emotional world from different perspectives in a multidisciplinary approach.

Espronceda’s space played a role in the creative process, perfectly integrating into the creation of the work itself in order to create a unique piece of art. To begin the creative process, the artists started first with exploring the mode of creation, trying to unite the theatre audience with the contemporary art audience – two worlds that sometimes never meet. The challenge was to lead the public blindly into the depths of the project without knowing exactly the beginning and end of the work. Each element had been studied to create a single piece where the boundaries between the world of visual art and that of theatre are eliminated. The dialogue began before the creation through the artists’ dialogue with each other, both sides trying to penetrate the other’s universe. Choosing Catalan as the language of the play was intentional and seen as an innovative way of addressing an international audience as art is capable of overcoming language barriers by causing emotions; the language is shaped with emotions, sounds, gestures, and musicality. The project examines the complexity of human being’s reactions, ensuring the spectator becomes part of the performance without knowing it. Each element within the play is seen as part of the study of human behavior. The spectator is therefore not simply a spectator but becomes an actor; their gestures and behaviors are transformed into a source of creation, giving rise to new elements introduced in the second and third edition of the project. Each edition is expanded with new elements, due to the very nature of the creation which is constantly evolving, leaving it up to the public to determine the boundaries between performance, art, and reality. The choice of not giving explanations on the installation, photographs, and paintings of Tarsitano repsonds to the need for freedom of the spectator not to be influenced regarding their gaze or emotions.

The contamination between the disciplines occured gradually, without leaving he audiece the possibility to understand where it begins and how it will evolve. The project is transformed intro a human performance, where the dialogue between theatre and visual arts gives rise to a fourth dimensio: that of the unknown, the invisible gievn by behavio of the public. Each element was chosen with the aim of leading the audience intro the personal emotional dimension withou them knowing.

The project was also created with a pedagocial dimension in mind: to bring the theatre audience cleser to contemporary art audiences and vice versa. They should fuce themselves in a free and autonomous way, reating a perfect snceranrio where curiosity and astonishment play a crucial role and bring about a “suprise effect”.

The experimentation over the years has led to presenting the project outside of Espronceda, in a theater where installations of contemporary as well as performance art have found a home, surprising its
audience. During these three years of experimentation and thanks to the feedback obtained by the public and critics, the project has been transformed into a new and innovative project which due to its interdisciplinary approach, study, and research, brings the two worlds of the arts closer together.Performance, visual, and theatrical art is combined into a single work, where the staging of the project is given by the intrinsic relationship of the artistic disciplines, creating a unique and unrepeatable third representation created by the performance of the public. Art is many things: experimentation, study, observation, research. Being visionaries is essential in
artistic creation and in involving the public. It is important to keep in mind that where the work is presented is engraved into the memory of the audience and how you involve the different generations is crucial to create an intergenerational dialogue, never forgetting the ability of art to involve a heterogeneous public by age, nationality, leading it to interact at a given moment as an integral part of the work. 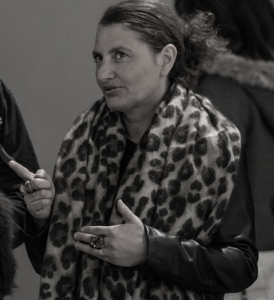 Savina Tarsitano was born in Calabria, southern Italy in 1970. She is a visual artist, curator, mentor and mediator. She is an autodidact, a nomadic person, loving cultures, places, nature, traditions. After a serious accident in 2005, she decided that was time to follow her dream to be an artist. Since this moment she started her second life. Her studies in Science Politics, European law, International Cultural Cooperation, Human rights gave her a different perspective to look at the world. She believes in solidarity and humanity, her mission as an artist is to contribute to a wider dialogue on the importance of collaborating together with solidarity, humanity and respect. She obtained several grants and fellowships in prestigious artists’ residencies from Europe, Asia, Brazil, China, USA. Her main artistic project “Emotional Architecture” , is based on the link between contemporary art and heritage. From contemporary art Savina research hinges on the concept of “landing-place”. She has spent creative periods in “theme-sites like islands, abbeys, castles, fortresses. Her works, executed using varied techniques, are incarnate visions arising from perceived relation with the places, the environment, conceived itself as a visual space. Her work has been exhibited across the world, among the main exhibitions, Biennale of Venice, 2011, Biennale of la Habana Cuba, Art Museum in Tokyo, Art Museum in Ubud, Bali. Thanks her achievements in advocacy she has been nominated: member of the EuropeanCulture Parliament, ambassador of the Rebirth/Terzo Paradiso International project of Michelangelo Pistoletto and Cittadellarte, co-founder of the social project Hearts for Earth, art teacher at the Children language school of Brussels, mentorship of the Future generation of the European Culture Parliament, mentor and curator of the art prize of the Royal Fine Arts Academy of Brussels and Espronceda, coordinator of the International peace project Kids-Guernica and founder of the project Creativity In Motion for a social change. 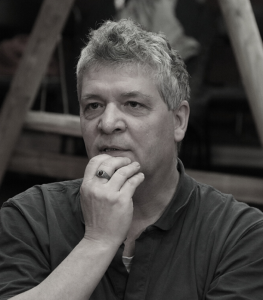 Albert Mestres i Emilió (Barcelona, January 11, 1960) is a writer, poet, translator, essayist, playwright, stage director and self-taught editor. The son of the composer Josep Maria Mestres Quadreny and the contemporary dancer Maria Teresa Emilió (who took her husband’s surname), Mestres wrote her first poem at the age of thirteen and her first play at the age of fifteen.Mestres enrolled in Philosophy at the university in 1980 but only finished his first year. He returned three years later to the Autonomous University of Barcelona, ​​but left again. At the age of thirty-seven, he enrolled in Humanities at the Universitat Oberta de Catalunya (UOC), where he graduated in 2008. He then did a master’s degree in Catalan Language, Literature and Culture Studies at the Universitat Rovira i Virigli (URV) of Tarragona.He has worked as a translator and proofreader, especially of art catalogs, since the age of twenty. He has collaborated with the groups Zootrop, La Fura dels Baus and OOFF Companyia. He is currently a professor at the Institut del Teatre de Barcelona. [3] Since 2007 he has been the coordinator of the reading club of the Francesc Ferrer i Guàrdia Library in Caldes de Malavella.He has collaborated in essay journals and regularly participates in symposia, colloquia and conferences on literature. [4] He is also the founder of the La Patacada Company.

The thatre project: “Sessiò de Nit – Poems Escènics” under the direction of the catalan poet Albert Mestres, the performer Ferran Echagaray and Eva Ortega and escenography by José Menchero with the participation of the italian artist Savina Tarsitano. It is a cultural project that reifored the concept of scenic poetry in the city of Barcelona.We had carried out investigations to stage seven scenic poems in the exhibition hall of Espronceda These scenic poems of diverse autors have in common the fact of being shrot and of being thought outside the logic of the conventional theatralic languace.

On the contary, they are thought with the logic of poetry, translated in a genuine way on stage. Session de Nit was designed so taht once each of the scenic poems has been completed, th audioence ill go out of lobby where there is an ehibition of photograps and paintins by the artist Savina Tarsitano specific to this project and then return to ses the next scenic poem. 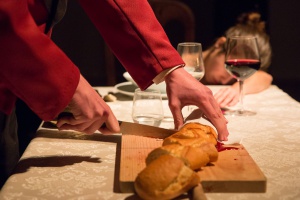 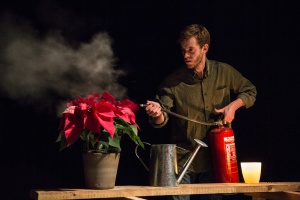 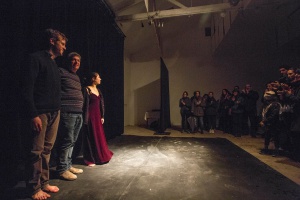 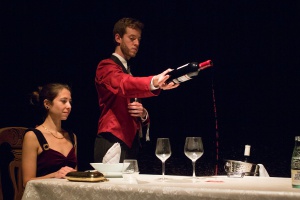 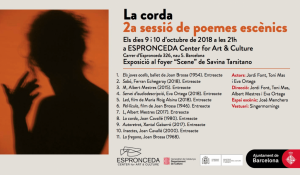