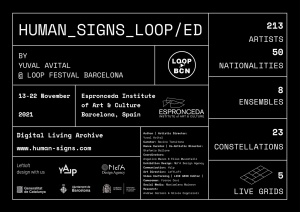 For the first time since its creation, the monumental artwork by Yuval Avital that brings together more than 200 artists from around the world will be presented at ESPRONCEDA Institute of Art & Culture on the occasion of LOOP BARCELONA: CITY SCREEN 2021, one of the most important festivals of video art in Europe held in Barcelona every year.

The participatory project HUMAN SIGNS, a global voice and gesture artwork, is conceived by multimedia artist and composer Yuval Avital in collaboration with Stefania Ballone, dancer and choreographer of Teatro alla Scala.

An art anomaly, not produced or commissioned by any entity, but desired by the artists themselves. Born during the COVID-19 seclusion, interpreting the viral aesthetic of this unique historical moment, HUMAN SIGNS has gathered till now over 200 performers from 50 countries, each proposing adeep individual art-testimony which converges into a powerful expressive multimedia fresco. Yuval’s 12 minutes vocal art testimony, auto-filmed during reclusion, expresses his most intimate state and becomes a fundamental layer to which all artists relate to as a timeline, musicality and intensity guide (Similar to the Renaissance concept of Cantus Firmus), allowing by this method potential infinite interconnections between all participants, creating choirs, Ensembles, Constellations and intimate dialogues. Bringing a deep sense of togetherness, HUMAN SIGNS aims to overcome physical distance and isolation therefore, it invites us to explore differently the spaces, languages, and forms of interconnection, as part of a collective reflection on a unique historical time. HUMAN SIGNS was presented online as a multimedia artwork through the Living Digital Archive and offline through LIVE GRID performances in five different cities around the world (New York, San Petersburg,Tel Aviv, Milan, Turin).

The exhibition leads the visitors into the HUMAN SIGNS universe through three chapters. The first element will be an immersive polyptych of seven parallel projections, in which a constant flow of the artists’ auto-filmed performances creates an ideally infinite ensemble. The second element of the exhibition allows visitors to virtually meet the artists and listen directly to all the different emotions they experienced while participating in the performance, and to view the LIVE GRID performances that took place in the past months around the world. The third element is an experience room, in which each visitor is able to engage completely with the artwork as a performer using their voice and body in dialogue with Yuval Avital’s cantus firm us. The exhibition will also host a new LIVE GRID involving artists from Barcelona in dialogue with the surrounding videos.

Born from a dystopian reality – the COVID-19 pandemic -, Human Signs is participatory online art project by Yuval Avital that until today involves 200 performers of voice and gesture, from 49 different countries.

The project begins with Avital’s self-recorded art-testimony in which he expresses with his voice all the feelings experienced during isolation. The result was a mantra that, “replicating” the aesthetics of the virus, travelled throughout the globe entering into the artists’ homes inviting them to respond through voice and gesture –two of the most fundamental forms of human expression.

Human Signs has been constantly spreading, involving more artists, and shifting towards new forms of proliferation. The different art testimonies are not only personal expressions of life in isolation during the pandemic, but are also part of a collective reflection on a unique historical moment; all the voices and gestures become part of a living digital archive.

Among the Human Signs artists there are: vocalists including some the most celebrated figures of ancient traditions, contemporary and experimental scenes; religious performers from every faith, and key figures of classical and baroque music; and dancers and soloists of leading contemporary dance and ballet companies; choreographers, and visionary performance artists, from every part of the globe.

For the past five months, Human Signs presented weekly live streaming of the art-testimonies in dialogue with each other, and with the Human Signs mantra through Avital’s YouTube channel. The dialogues took the form of Ensembles and Constellations, offering complex dynamic compositions, or static frameworks that resemble allegoric frescos with layers of meaning and metaphors to explore.

Now Human Signs takes the form of website-as-a-museum. The portal becomes a space for you to enter and wander among this chorus of voices and gestures.

Bringing a deep sense of togetherness, Human Signs aims to overcome the physical distance and isolation. And in doing so, it invites us to explore differently the spaces, languages, and forms of interconnection, as part of a collective reflection on a unique historical time. 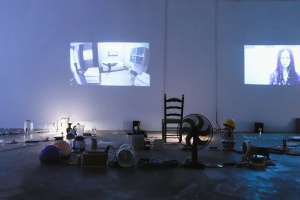 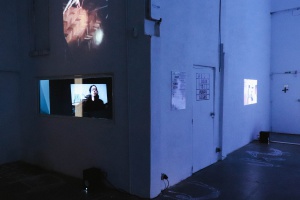 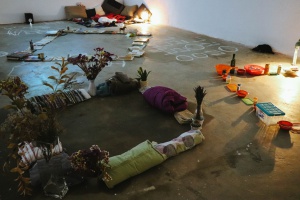 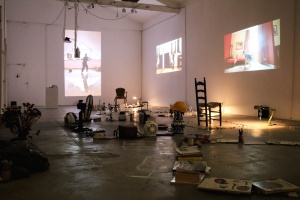 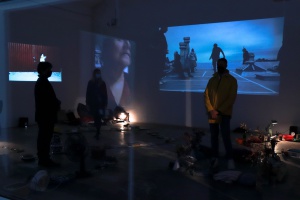