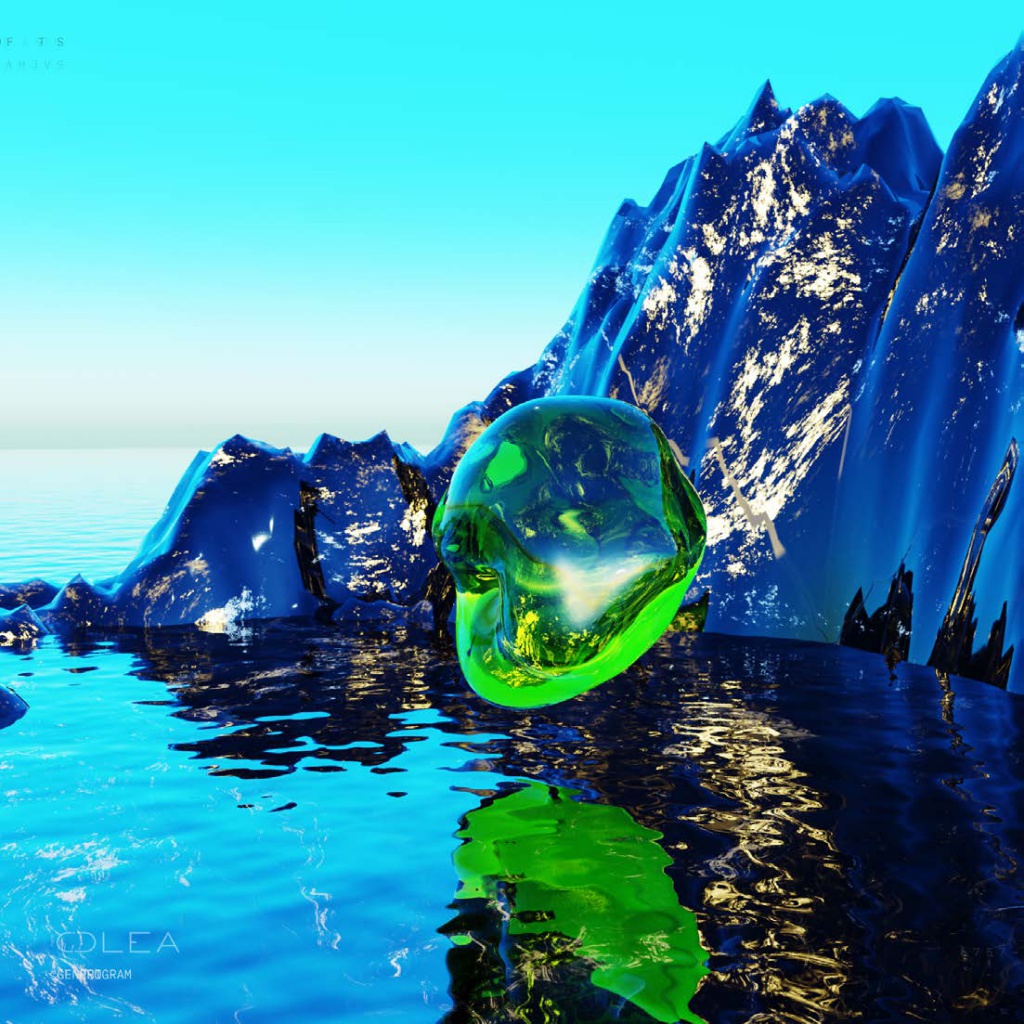 The OLEA project proposes a space for reflection and a rapprochement of species, concepts, economies, societies and information flows that converge in a single fluid.
Olive oil.

Historically related to deities, abundance, health, softness and liquid gold, olive oil is the perfect place to embrace other natures. Genetic alteration, its artificial construction and coexistence in hybrid spaces, configure a new ecosystem of ethical, religious, political and social thought that, thanks to this project, aims to link molecularly with technopolitical structures, cryptography and decentralised models of thought and economy.

OLEA is an oleic fluid in which the properties of this oil coexist with the molecular synthesis of the code that gives life to a cryptocurrency in blockchain environments.

This hybridisation of spaces reveals a new place of understanding. A new unexpected future in the revolution of the species.

The main objectives of the project are the artistic achievement of an olive oil that is also a cryptocurrency in its biological essence through the coexistence of the DNA molecule of this currency and the molecules of the oil. After the DNA synthesis of the code that gives life to the smart contract in the blockchain alluding to the OLEA currency, the next process is the achievement in the laboratory of the organic coexistence of both molecules.

Once this step has been achieved, a series of artistic productions based on this milestone begins, such as interactive installations, graphics, audiovisual productions and laboratories.
Through this symbolic, scientific, technological and artistic gesture, the project proposes the creation of a hybrid element in the worlds of consumption.
A new liquid that can be understood in multiple ways and that in turn needs to be re-signified and re-defined. The liquid now represents decentralised economies in its own being, being anobject of debate. But it can also continue to be consumed, permeating everything with its own essence, reifying everything in its path.

Another main objective of the project is to identify other possible economies based on and located in raw materials, which, thanks to this unprecedented connection, offer new avenues for social, cultural and economic development. Between the blurred lines of conceptual art and bio-art, the OLEA project redefines the boundaries of the insertion of the digital in all corners of
everyday life and establishes technology and its relation to conceptual creation in the place of the “no limit”. Morally and ethically debatable, the work aims to open a space for research and
dialogue around the “revolution of the species” and the writing of an uncertain future in the conjunction of the organic, the static, the digital, the analogue, the virtual, the tangible and the intangible, the bit, the atom, matter, antimatter, love, war, the economy, the reification of nature and the transfer of information. At the same time, the production is an etymological challenge already posed in artistic practice and its relationship with the scientific laboratory.

The project is thus inserted in a complex place between the artist’s studio, speculative imaginaries, the biology laboratory and the mass media production chain. Pretending to be at the centre of the debate, OLEA aims to be an epicentre of thought around the new decentralised economies and group membership of local digital or political environments. It establishes collapsed boundaries on the limits of the collective unconscious and the notion of politics, currency and contemporary identity.

Now with OLEA, any user in the world can be part of a new decentralised ecosystem in which he or she can be a protagonist by the mere act of consuming this liquid gold. As a metaphor for non-abundance and stock control, the limitations of nature and its overexploited resources play an important conceptual role here in their relationship with the digital, always understood as unlimited and replicable.

Now the currency of exchange is inserted into the nature that once gave rise to it under the concept of barter, updating the chain of construction of the historically understood concept of economy. As an act of freedom and citizen empowerment, OLEA works from the basic structure of the consumer assembly line to inoculate new concepts, helping us to understand the potential of technology as an engine of social and citizen change and in art as an operative strategy for the production of thought and the promotion of ideals.

In 2020 the museum founded by Solimán López, Harddiskmuseum became the first in history to be stored in DNA thanks to the collaboration with geneticist Dina Zielinski, the Twist Bioscience laboratory and the support of Art Project Partner. 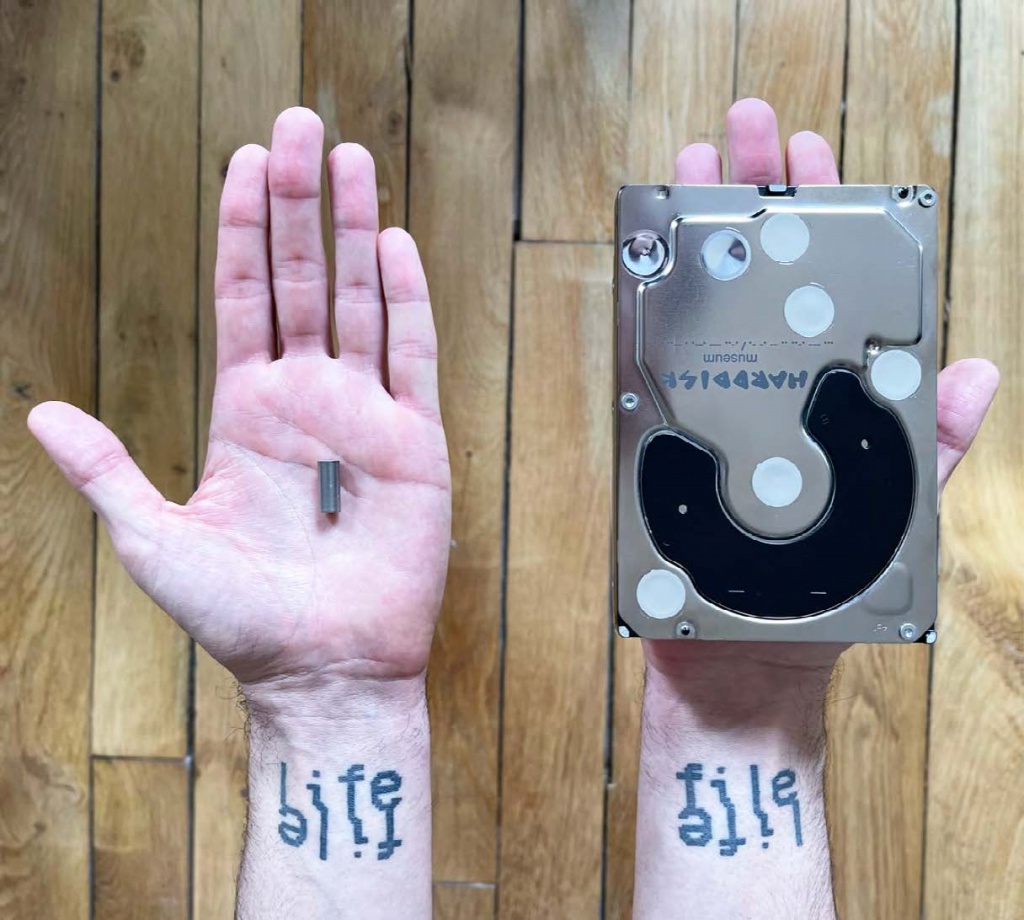 PROCESS
1º Creation of a smart contract for a cryptocurrency based on the Ethereum
network. The currency is called OLEA.
2º Compression of the folder containing the contract code in .zip format.
3º Encoding of the .zip file in ASCII code.
4º Encoding of the ASCII code into binary code.
5º Encoding of the binary code 1-0, 0-1, 0-0, 1-1 to quaternary code in A-GT-
C characters using Python-based code.
6º Synthesis of the DNA chain.
7º Sending to the laboratory.
8th Artificial production of the DNA molecule containing the sequence
created.
9º Storage in silica solution.
____________
10º Integration of silica into the oleic element.

STAGE 1
LAB
Understood as a laboratory open to participation, the project is temporarily embedded in the available space to signify an environment of thought, criticism
and executive production of the idea. By inviting professionals, the public and critics, the laboratory becomes a multidisciplinary meeting place to make the idea possible, generate community and establish critical points around the project. It is the place where the effective creation of the OLEA liquid is envisaged. Planned: Espronceda Institute Barcelona. September 2021. Garden Ars Electronica

STAGE 2
PRODUCTION
The artistic and visual implementation of the project occupies this stage. The main objective is the creation of a selfexplanatory installation of the whole process in which the main protagonist is a large fountain that makes the oil gush. The environment of the fountain is completed with all the production of the imaginary of the work, such as bottles, laboratory samples, writings and sketches, critical texts, speculative animations, interviews and other materials alluding to the conceptual and plastic evolution of the idea.