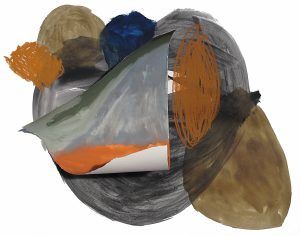 Clara Claus is a French artist based in Brooklyn. She studied interior design at Duperre in Paris and holds a BFA from the Cooper Union in New York City. Through her multimedia practice, she focuses on the real and its feeling, via the investigation of the surrounding world and its distorted forms such as memory, sentiment and imagination.

Claus’ varied practices include drawing, painting, installations, video and collaborations with music and other disciplines through the composition of graphic scores. She considers each medium as a refracted particle of the real, allowing her to explore its different aspect, and build visual narratives of perception. Claus has performed Graphic Scores at The Chimney, Littlefield, BAM, and Pioneer Works in Brooklyn with a number of acclaimed musicians such as Bryce Dessner from the National, Sufjan Stevens, Joakim, and David Cossin from the Bang on a Can All Stars. In the past few years she has exhibited at the Pioneer Works Bookstore and The Hollows in Brooklyn (NY), at the Basu Foundation in Kolkatta (India), and in the eight rooms of the Chateau Royal in Collioure (France).