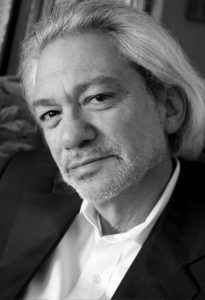 Morris Rosenzweig was born October 1, 1952 in New Orleans, where he grew up among the tailors, merchants, and strong-willed women of an extended family which has lived in southern Louisiana since the mid 1890s.

His works have been widely presented throughout the United States, as well as in Denmark, Sweden, Holland, France, Germany, Japan, Argentina, Mexico and Israel. Among the noted ensembles who have brought these works to life are Speculum Musicae, “Piano and Percussion-Stuttgart”, The New York New Music Ensemble, the Chamber Players of the League-ISCM, EARPLAY, NOVA, Philippe Entremont with the New Orleans Symphony, and Joseph Silverstein with the Utah Symphony.

Mr Rosenzweig has received honours from the Guggenheim Foundation, the Rockefeller Foundation for a residency at Bellagio, an Academy Award from the American Academy of Arts and Letters, a commission from the Koussevitzky Foundation in the Library of Congress, a commission the Fromm Foundation at Harvard University, and the support from the Alice M. Ditson Fund for two recording projects; He has also been awarded the McCurdy, Nietche, Rappoport, and the International Horn Society prizes in composition.

The University of Utah named him University Professor in 1999 and additionally honoured him with a Distinguished Scholarly and Creative Research Award in 2003.
Mr Rosenzweig is an active conductor and coach and has worked for many years with the Chamber Players of the League-ISCMinNewYorkandthe CanyonlandsEnsemble in Utah.

Presently Distinguished Professor of Music at the University of Utah — where he teaches composition, theory, contemporary performance practice, and directs the Maurice Abravanel Visiting Distinguished Composers Series — he has formerly held positions at Queens College and New York University. A frequently-invited speaker, he has given colloquia at Harvard, Columbia, Brandeis, Stony Brook, and the University of New Mexico, among others, and served as Guest Composer at the Composers Conference at Wellesley.

He was educated at the Eastman School of Music, the University of Pennsylvania, and Columbia University.