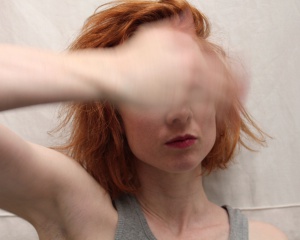 (1987- Belgium) lives and works in Brussels. She graduated in 2017 at l’Académie Des Beaux-Arts Brussels and at their specialised choreography program ISAC (l’Institut Supérieur des Arts et des Chorégraphies) in combination with sculpture. Her graduation project “Backstage of the Body“received the Horlait-Dapsens grant, the Espronceda prize and the Prix de la Ville de Bruxelles. In 2020 she will have her first solo-exhibition at Central.lab Brussels.

Inspired by the body which doesn’t always do what we want, the body which betrays us with blushing or trembling, the body that has his limits, Leen Van Dommelen creates a world in which the ambiguity between control and loss of control is always present.  Balancing between performer and sculptor, in a world where she deals with the body as matter. Manipulate, observe, dissect, analyze, and play with the things that we normally cannot see or touch. The things that are sometimes not things, that are sometimes immaterial. A tension that moves on the border between reality and imagination, inside and outside, matter and non matter, control and the loss of control, between a child’s game and not a game at all. “To be on stage you must be in control but to really play the game you have to lose control. Taking the risk of failing. Finding a kind of realness. And maybe the failure is more interesting than we thought.”