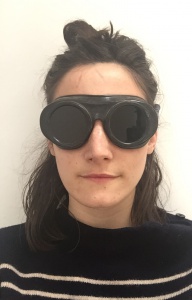 (1991- French) Charlotte Flamand ives and works in Brussels. She graduated in 2017 at l’Académie Des Beaux-Arts Brussel. She obtained the following awards: honourable mention at KoMASK Masters Salon Painting, Horlait-Dapsens Prize, Espronceda/Arba-Esa Prize, prize of the City of Brussels, award of Excellence of the City of Brussels, Moonens Prize, laureate of the Godecharle Prize. Her work has been exhibited in Belgium. In 2015, Charlotte Flamand’s work on the erasure of the figure earned the Prix Image Imprimée awarded by the Academy of Arts and Letters. In 2016, she did a training course in Christian Macketanz’s studio and most recently obtained the Godecharle painting prize.

Her work focuses on the relationship between the act of seeing and the lost in playing with the places where the gaps in the representation, the limits of the image are instituted.The Painting becomes a space of possibilities where each piece finds its meanings into their own relations. By analogy she tries to deploy towards an unfixed story, narration which at any time can be torn or altered by the viewer. From there, she questions our relationship to images, their materiality but also this inevitable split by which we come to the visible.