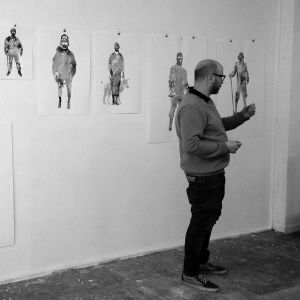 (Gijón, 1972) work as an artist has led him to question cultural and social reality from a late romantic perspective, with a continuous exploration of social imagery. His work strives to check the power of art as an experimental space capable of creating new worlds. His work has been presented in various international exhibitions, among the latest: (2013 S.O.S) Es Baluard, Palma de Mallorca, (An Essay on culture 2013), NCCA, Moscow, (Distopia:right now) 2012 Museum marble of Carrara, (Funeral Pyre 2012) Matadero, Madrid, (Cacotopia 2011), First Screen, La Pedrera (AUTRUI 2011) Centre Dart Le Lait Grahulet, France, (Block House 2011), (Galeria Raquel Ponce, ARTIUM (stop! 2010), Royal Academy of Spain in Rome, (Fatherland or Morte! 2010), Virgil de Voldere gallery, New York, (hostile 2009), National Museum of art Sofia (International Reencontres, 2009), Queen X Bienal de la Habana, (Comunicacionismos, 2009), A Foundation, London (Off the Street, 2009), Insert Coin, Spanish Young Art, October Contemporary, Hong Kong 2009) or Tina B Biennale Prague, (Small Revolutions 2008) or The Promised Land (Chelsea Art Museum, 2008). Generation 2003 by CajaMadrid award. Sponsored among others by Hangar and Bilbao art. In 2010 was a fellow of the Royal Academy of Spain in Rome and the centro de arte Le Lait of Albi in France. Currently prepares solo exhibitions for Laboral Art Center in Gijón, Puma Pungo Museum in Cuenca, Ecuador and several private galleries. In 2014 will be residing during the first months of the year in RU, Residency Unlimited, of New York, and at Laboral Art Center during the next spring.