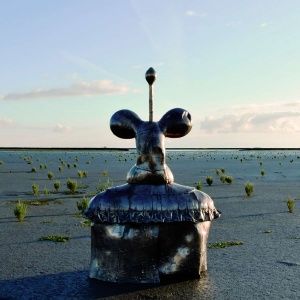 (Hamburg, 1977) is a bronze sculptor. He graduated as Magister Artium (Sculpture) at the Academy of Applied Arts in Vienna and obtained his ultimate degree as Master of Fine Art (MFA) at the University of East London. He received several awards for his works, like the Austrian Theodor-Körner-Prize or just recently the Prize of the Schleswig-Holsteinische Wirtschaft, the Dietrich-Schulz-Prize. Fabian Vogler is a member of the Federal Association of Fine Artists and of ENCATC Brussels and regularly takes part in arts symposia, residencies and conferences around the world. He was commissioned to create the Senior Fellow Award of the Academy of Applied Arts (Vienna) as well as the current “Prize for Engagement Against Discrimination” for the German Federal Anti-Discrimination Bureau. Vogler was course director for sculpture at the International Summer-Academy, Venice and just gave a workshop at the University of Barcelona (Facultad de Bellas Artes) on the topic of “Liquid Gender”. Fabian Vogler is keenly interested in collaborating with other forms of artistic expression, such as music, soundscape, video, performance and dance. Apart from having created “Scultura e Musica in Movimiento”, commissioned by the Kutur21Festival in Husum 2014, he also initiated “Octave Stance” in cooperation with the Trinity College of Music and LABAN in London in 2008 and together with Francesco Giannico he designed the sound installation “Emotional Decrypter” for “Liquid Gender” at Espronceda in Barcelona in 2016.