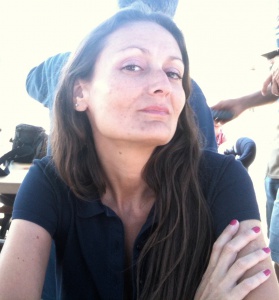 Chiara Passa, visual artist (Rome, 30 April 1973) working in media art since 1997. I am graduated from the Fine Arts Academy of Rome; Master in audio-visual media at the Faculty of Modern Literature. Lived around for several years. Now I am living and working in Rome. My artistic research analyses differences in virtual spaces through a variety of techniques technologies and devices – often using virtual reality and augmented reality technologies as an artistic medium to explore architecture as an interface. I use VR and AR to comprise their intrinsic language and so on for shaking-up and challenging the static notion of architecture, by exploring the liminal duality between tangible and virtual place, achieving in art a strange oscillation between spaces. Yet, I work with animations, net-artworks, interactive and site-specific video-installations and AR / VR video-sculptures, sometimes made of carrara marble, fresco technique, plexiglass, or 3D printing parts. Yet,  I use VR medium in order to create site-specific video installations using a wide range of google cardboard. Typically, the Google cardboards are installed all over the real space, designing geometric shapes in liminal areas where onlookers can peek/peep thru 3D viewers over the wall, and so immerse themselves into re-constructed/resized VR space made of wired geometric angles and futuristic views, sometimes semi-open or semi-closed at 180°, 220° or 360°, so highlighting the paradox of the modern space-time condition, which nowadays is even more diluted in between physical and liquid space. My work has been presented internationally in festivals, conferences and institutions, including 2019 – Object Oriented Space. Solo show at Museum MLAC Rome. Curated by Elena Giulia Rossi.  “Virtual Natives – Sculpture”, Roehrs & Boetsch Gallery, Zurich (2019); “Oslo Night show” HEK Museum Basel (2018); “In Sonic”, immersive art show, ZKM |Centre for Art and Media Museum, Karlsrhue (2017); “From live architecture: Dimensioning”, solo show at Furtherfield Gallery, London (2016); “Off Biennale Cairo” (2015-2016); “ISEA Disruption”, Conference and exhibition at Vancouver Art Gallery. (2015); “Morphos”, Vortex Dome – immersion media, Los Angeles (2014); Media Art Histories IV – RENEW conference, Riga. (2013). ; FILE | Electronic Language International Festival, São Paulo. (2011); Electrofringe – a festival of new media art, Newcastle, Australia. (2008); BizArtCenter, Shangai (2005); MACRO – Museo di Arte Contemporanea, Rome (2004), ;11th Biennale of young artists of Europe and the Mediterranean countries: “Cosmos – a sea of art”, Athens. (2003); 48th Venice Biennale (with the Oreste group, Italian pavilion), Venice (1999) and Fondazione Bevilacqua La Masa, Venice (1999).