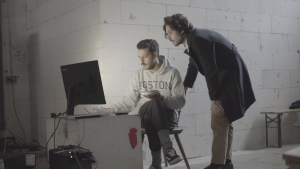 Uwe Brunner is an architect, visual artist, and researcher. He studied at the Technical University in Vienna, the School of Arts in Amsterdam and received his Master’s Degree from the Academy of Fine Arts in Vienna. His work has been exhibited and screened in multiple locations including MAK Museum for Applied Arts Vienna, SCI-Arc Los Angeles, Animation Nights New York, etc. In 2017 he received the TISCH-Scholarship from the Federal Chancellery of Austria for his Master Project „A Virtual Cultivation“. Between 2017-2018 he was working with Mark Foster Gage, New York. Since 2019 he is a Faculty Member and PhD Candidate at the ./studio3, Institute of Experimental Architecture at the University of Innsbruck. He is currently researching in the field of extended reality (XR) environments and digital counter-aesthetics. His particular interest lies in the potential of the Essayistic within the architectural creation of space, and he seeks to uncover new forms of spatial communication by suspending the dualistic regime entrenched between the visible and invisible, the material and immaterial, the objective and subjective.