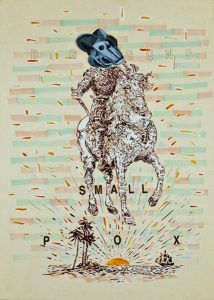 Johnny Fitzsimons (born 1980, Dublin, Ireland) graduated from DLIADT with a BA honours degree in Visual Arts Practice. Fitzsimons has worked extensively in the creative sphere, from making award winning music videos, murals, music performances and theatre production as well as exhibiting his paintings and drawings in many galleries both in Ireland and internationally.

The artwork produced for this exhibition was completed while on a recent residency in Barcelona. He is currently based in the Canary Islands.