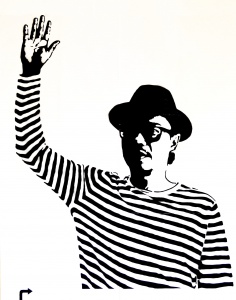 About the artist
Mr. Zen is a 41-year-old Thai artist who has been on this career path for more than 20 years. He worked as an advertising creator, interior designer, painter, and sculptor. Mr.Zen always works hard and learns his entire life as a student as his interview in many media. He has many skills because of multiple interests in artworks and processes. He works with people from different careers like photographers, musicians, and social activists.

The artworks of Mr.Zen are always interesting because they reflect different ideas and always values of society.

When we focus on his artworks over the past 10 years as a painter and as a gallery owner (Wua Art Gallery&Studio) that demonstrates the flexibility and joyfulness of using new techniques for creating works.  Bringing the work alive took many different forms, such as T-shirts, which were very successful in its first collection and the collection of swimwear that is the next project.

His artworks express the unique style and unique sense of humour that makes people who follow his works instantly recognize them as being from Mr Zen.

Street art has also been a major part of Mr Zen’s artistic endeavours. His paintings are often displayed as outdoors on the beach and on the streets. He uses his work as a tool to communicate campaign messages to the public without the need to walk into an art gallery or a place that is far away from normal life. It is the intention of Mr Zen to make art part of people’s lives.

For “I’m Ok”, Mr. Zen’s upcoming exhibition, new ideas and the chance of the public engagement with some of the artworks will mark his to work with Espronceda 5 years after his last show here, one of the institute’s first resident artists!