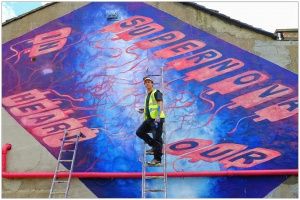 Born in Buenos Aires 1967 and began studying art at age 11.
Moved to London in 1995 to study at Goldsmiths where he got an MA in Visual Arts.

He lives locally and has created a number of landmark murals in Deptord, New Cross and Telegraph Hill.

In 2003, he formed Artmongers to continue to make public art in the area but as a sustainable business and was commissioned by local authority. Artmongers also commissioned Laban students in 2007/8 to produce choreographies for an event in the streets of Deptford.

In 2010 with a group of residents, he formed Bold Vision – an umbrella charitable organization which pulls together local initiatives such as ‘Hill Station’ Community Cafe, New Cross Learning and Common Growth Community Garden.