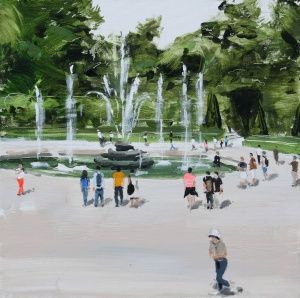 Sanja Milenkovic was born on 17 November in 1983, in Nis, Serbia. At the age of 18 she moved to Milan. She graduated in painting and completed her post-graduated studies in Visual Arts at the Academy of Fine Arts Brera in Milan, Italy in 2009. She has had numerous exhibitions in Italy and abroad. Currently she lives and works in Milan.

“My inspiration comes from different constance scenes and situations from the real life. The majori- ty of the urban and almost conceptual paintings I am creating, is a research on my memory and how snapshots shape can change and create something new. In my works people are playing a major role. I like the moment when the painting is changing and suddenly there is a perfect disor- der and some imaginary conversation between the people. The sensitivity is revealed in the ability to perceive the condition of nature and translate it into images and consonants colours. Perfect mix is achieved between nearly realistic painted human figures and almost abstract environment. Often I use perspective as a main and fundamental element of composition.”