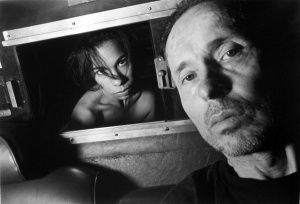 In 1980, Ryan Weideman cruised into New York City to become a street photographer. Having graduated with an MFA from the California College of Arts & Crafts, Weideman already had a style greatly informed by his studies of the great photographers of the 1950s-70s, namely Robert Frank, Garry Winogrand, and Lee Friedlander. After a month in city, Weideman’s focus turned to more immediate, real-life concerns – how to earn money to pay his rent. Soon after moving into a tenement building on West 43rd Street (the apartment in which he still lives), a chance encounter with a neighbor who drove a taxi led Weideman to his newfound profession. For the next thirty years Weideman would spend his nights as a licensed taxicab driver immersed in the ever-changing landscape of New York City. His original licenses (year by year) will also be on view in this highly-engaging exhibition

Ryan Weideman’s work is held in the collections of institutions such as the Brooklyn Museum, the Art Institute of Chicago, the Oakland Museum as well as many prestigious private collections. He has received numerous awards including the Guggenheim Fellowship Grant (1992-1993), New York Foundation for the Arts Fellowship (1986-1987) and National Endowment for the Arts Fellowship Grant (1984-1985).