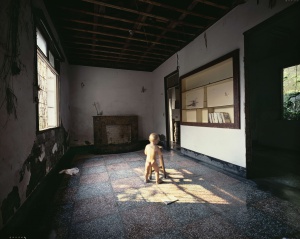 Wei-Li Yeh was born in Taipei, Taiwan, in 1971 and emigrated to the United States at the age of 11 with his family.
During his adolescence, in Tampa (Florida), he became fascinated by heavy metal music and music
rock’n’roll. He studied photography at the University of South Florida (1994) and in Rhode Island
School of Design (1997). After a visit in 1996 to Taiwan (the first since his emigration to
USA), was attracted by the issues of displacement, assimilation, cultural identity and
racial policies. Yeh then moved to New York, showing his work at Columbia
University, the Bronx Museum of Art and the International Center of Photography. In 2002 he decided
return to Taiwan, becoming a very active artist and curator. Your work is exhibited or
he collects all over the world, and his photographic or textual projects explore the dynamics
of the human being as an individual in relation to collective practices. He currently lives andworks in Yangmei (Taiwan).