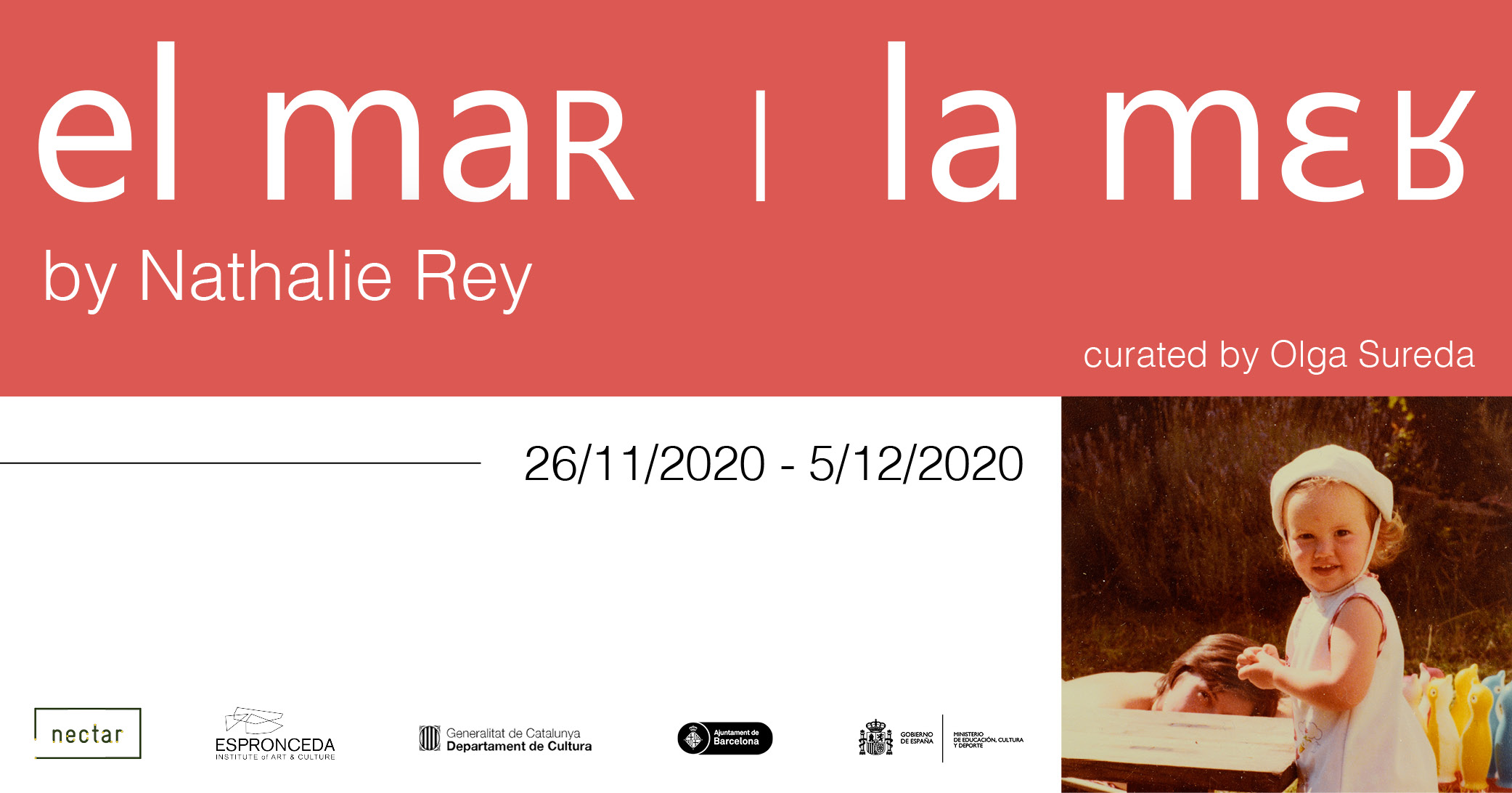 Exhibition of the artist Nathalie Rey curated by Olga Sureda

Exhibition opening: November 26 at 6pm until 9pm. Reservation on eventbrite.

In el mar / la mer, various recurring topics in Nathalie Rey’s work – such as children’s imagination, shipwreck
understood as failure, the denunciation of contemporary consumer society, and environmental catastrophes
caused by human beings – are interwoven with a clear common thread: the sea.
In Nathalie Rey’s projects, the sea (la mer) appears powerful but serene, beautiful but dangerous, representing
peace and calm and at the same time harboring shipwrecks, battles, and environmental disasters. It gives us
shelter and feeds us, and it is the mother (la mère), referring to the mother with her child and the mother earth
that nourishes us, cares for us, and protects us.
From these two terms and their symbolism comes the title of the exhibition: el mar and la mer, the latter when
written in the phonetic alphabet represents two homophonic words in French with different meanings (sea and
mother). Rey thus creates a visual play on words and uses what they symbolize for her to speak of humanity, wars,
catastrophes, and – in short – of our mother earth based on her children’s imagination and through apparently
innocent objects.

Various works that make up the exhibition evoke the artist’s childhood memories of her grandmother’s village
in Belle-Île-en-Mer, an island off the Atlantic coast of northern France. For instance, La Danza de Los Ahogados
[The Dance of the Drowned] and Tas No.10, two installations in which the artist uses objects that she found in
her grandmother’s house – such as life jackets and penguin-shaped bowling pins – and the memories and stories
they contain in order to raise her voice against socio-environmental tragedies.
This is the case with the story behind Tas No.10 (2014), composed of a series of large penguin pins piled up on top
of each other (hence the title tas, which means “pile” in French). Here, Rey takes as her starting point her personal
experience when coming across these penguins at a time that coincided with a tragic family circumstance to
create another branch of the Tas series (2013-2018), in which the artist refers to leaked photos of the Abu Ghraib
camp after the US invasion of Iraq which showed a pile of naked bodies of the prisoners tortured by camp
officials.
The same happens with La Danza de Los Ahogados (2020), in which life jackets hanging from the ceiling and
belonging to the ship of the artist’s grandfather, a navy captain, refer to current problems of migration with the
closure of borders and the drama of the pateras, a clear allusion to the sea when it comes to shelter and social,
economic, and ecological misfortunes.
For Nathalie Rey, the sea also reflects the irreversible effects of climate change and the consequences of human
footprints on the environment through the consumption of plastic. This is what she tells us in her project Naufragio
(Shipwreck, 2012-2020), which was born after she read the news about twelve shipping containers that fell into

the water during a storm in the Pacific Ocean, one of which contained thousands of children’s bath toys that
were left floating and contaminating the sea for years. Here, the artist recreates part of this adventure with an
installation of rubber ducks on a beach in the Maresme that she captures in a series of photographs (Shipwreck
I, 2012). Nathalie Rey also exhibits a variant (2019) of this project, composed of hundreds of these plastic ducks,
yet this time piled up inside a bathtub about to overflow, which can be understood as a metaphor for the sea
and consumer society with a nod towards the world of children, pure and heartless at the same time.
A few years after the first Shipwreck work, Rey recreated the scenario but this time representing the shipwreck
of thousands of differently colored Kinder Surprise eggs that invaded the island of Langeeog, on the Baltic Sea
coast, in Shipwreck II (2017), an installation composed of metallic sandbanks filled with pink sand and hundreds
of chicken eggs. In this case, the artist wanted to emphasize the contrast between the natural and the artificial,
the real and the false, by replacing beach sand with pink artificial sand and by using biodegradable chicken
eggs in place of the plastic eggs.

With Shipwreck III (2018-2020), Nathalie Rey has begun another active process of transformation in nature, this
time not based on events such as the shipwreck of rubber ducks or Kinder eggs, but creating her own narrative.
Rey symbolically contaminates different landscapes with the very material that she denounces: plastic. The
artist thereby intervenes voluntarily in the different scenarios, scattering hundreds of colored plastic jars and
creating a landscape that visually attracts the spectator’s eye but which, in the end, denounces the harshness
of reality.

The works of this series shown in the exhibition illustrate interventions that took place this year (2020), some
of which were documented in photographs and printed on vinyl canvas, such as Cap de Grills on the Costa del
Garraf and Port Skeul on her grandmother’s island, and others documented in video, as we can see in the action
that took place in Belle-Île-en-Mer, giving the video its title (Belle-Île-en-Mer). An action consisting not only of
dispersing plastic but also of collecting it later, with the desire to awaken consciousness and set an example.
It is worth highlighting that the final stage of the Naufragio project has also had an educational and participatory
side, in which the artist – with the intention of promoting cooperation and collective thinking around what she
denounces through her projects – has worked with various collectives linked to the environment and with
groups of children in collaboration with schools, making the “Taller d’Art”. Sharing her concerns and her creative
process, Rey has opened a dialogue between her work and the children’s imagination to create works of art
with them from plastic waste, taking action and transmitting her message.

Nathalie Rey is currently working on other ramifications of her artistic process, as in Donnant 1 (2020), a black-
and-white print in a wooden and methacrylate box in which the artist intervenes in the photographic medium

rather than directly in the landscape. By nailing colored pins that refer to plastic bottles into the black-and-
white photographs, Rey also reinforces the contrast between the natural and the artificial. Then there is the

photographic series La Balsa de Santa Susanna de Vilamajor (2020), a project she is developing with the artist
Enric Maurí, and in which she once again “contaminates” the landscape – this time not with plastic jars, but with
some of her fetish objects, such as rubber ducks or stuffed animals. Composed of five color prints, both this
series and Donnant 1 refer to places the artist has visited and that have meaning for her.
In Plastic Sea (2019-2020), Nathalie Rey makes visible through her inverted maps what is invisible to our eyes: the
massive amount of waste that ends up in the oceans. Composed of twenty circular canvases (in the exhibition
we can see four of them: Plastic Europe, Plastic America, Plastic Asia, and Plastic Africa), in this series the artist
hand-stitches thousands of colorful plastic pearls that symbolize the enormous garbage dump in oceans, seas,
and lakes. A meditative action that requires patience and precision and through which Rey denounces a global
problem.
So too in Noticias 2, a series of nine black-and-white images that the artist has taken from press clippings and
altered in a subtle and almost unnoticed way, alluding to the manipulation and falsification of the mass media
and consumer society that Jean Baudrillard discusses. In this work, as in the others, Rey alters the narratives
coming from stories and images that speak of tragedies caused by human beings (such as the Nazi Holocaust
or the atomic bombs of Hiroshima and Nagasaki) to move between the false and the real, the natural and the
artificial, the beautiful and the terrible, and between innocence and cruelty.
A game of dualities which Nathalie Rey navigates to tell her own story of humanity from her personal point of
view and to vindicate collectivism over selfishness and individualism, because, with intention and action, we
could all turn something destructive into something constructive by recycling or reusing what we are polluting
with.

In el mar/la mer, the sea becomes a tragic-sweet leitmotif, like the passage from childhood to adulthood, or the
history of humanity, with its advances and at the same time its misfortunes. Nathalie Rey, an artist aware of
the era in which she lives, therefore proposes new paths of transformation that invite us to conceive the world

from empathy and conscience.