ART OF CONFINEMENT – Collective exhibition by the Astillero Espacio Cultural 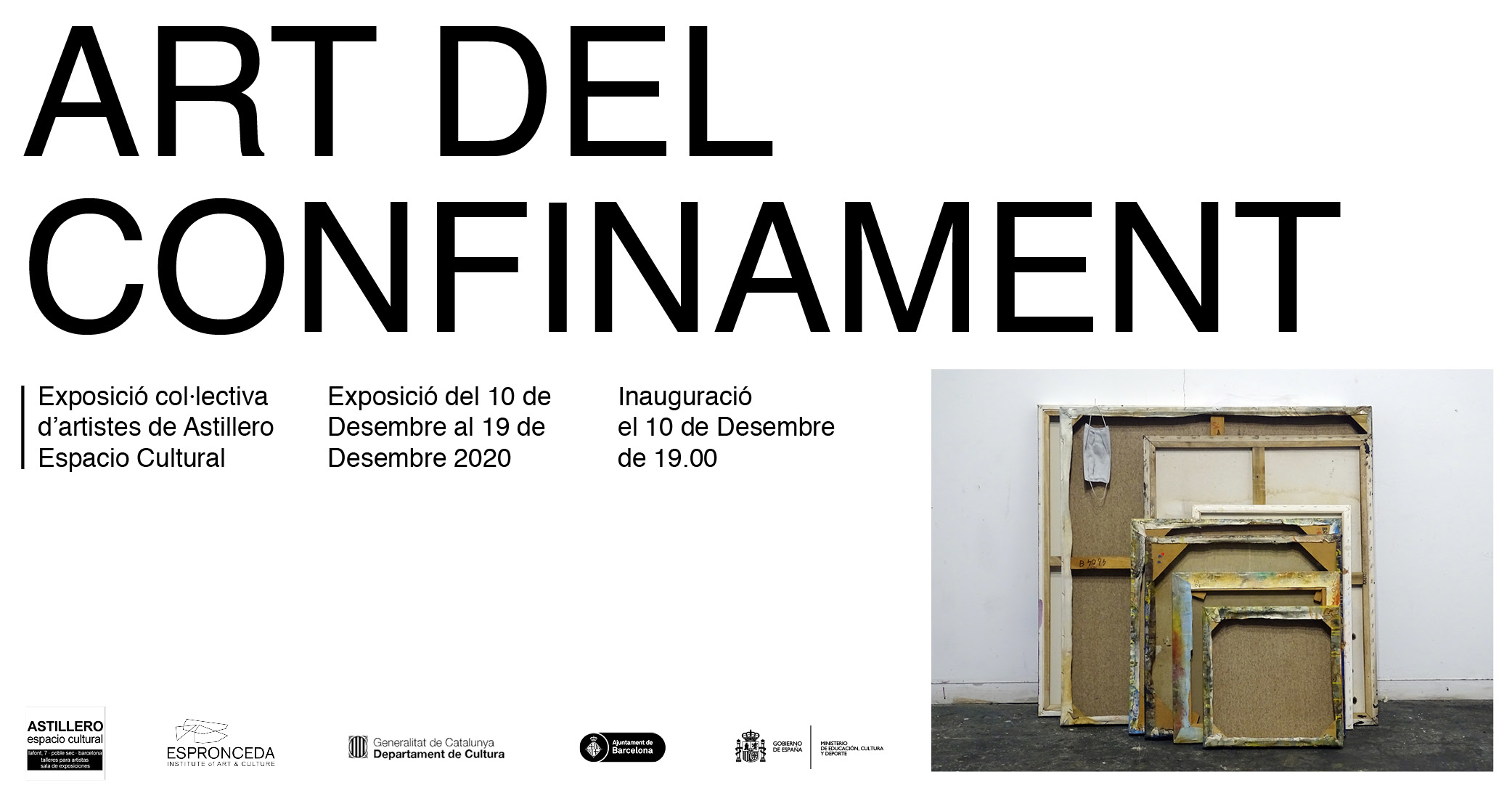 ESPRONCEDA -Institute of Art & Culture is pleased to present the exhibition “Art
of Confinement” by the Astillero Espacio Cultural of Barcelona. The collective
exhibition born thanks to the idea of Carles Guitar. According Espronceda’s
philosophy to open its doors to local artists and local associations translate its spirit of collaboration and cooperation with local community.

Trapped energies, delayed expressions, letters without stamps, silenced needs, restrained
concerns, shelved brushes, machines on standby, perceptions and sensitivities in flight
mode, all this under the long shadow of impotence, of precaution you end up questioning,
without any certainty of the captivity’s duration, waiting for the opportunity to open the
door, to turn on the light, to pedal again, to sharpen pencils and open paint tubes, desiring
to see entire faces, to uncover expressions, to open the window and let the air in, to go out,
to show ourselves, to open the box and let everything out, to show what we’ve done these
days, and to transform everything occurred into a briefing, a report, silenced art, a feeling
of impotence for those who have gone, a promise to restart, to go back, to unleash at last
the art of the lockdown.

PERE L. CAMPINS
The Mallorcan artist does not paint pictures, rather he does them as in ancient times poets
and sculptors made their works.
His paintings are usually made with lines, stains, objects, papers, and plastics together
with iron wires and other materials. What he seeks is to sew, to link, to relate some feelings,
concerns, affections to his present: the work.

MARIANA MIZARELA
Passionate about the collage technique and the avant-garde of the 20th century, she collects
vintage photographs, and combines techniques with painting up to animation. On the other
hand, he has a huge interest in drawing, where he lets his imagination expand into new
worlds. His references are of a biographical nature or global experiences. For this exhibition
he presents drawings made throughout the confinement, where we all felt trapped in our
houses. Far away, however all sharing the same feelings.

PABLO PEÑALBA
Buenos Aires, 1981. He currently lives in Spain. Training in graphic design and photography
at the University of Buenos Aires (UBA) Degree in illustration at the Llotja School of Arts
and Crafts in Barcelona. “My work is dirty realism of human emotions”

EVA ALONSO
“No tears please, it’s a waste of good suffering” is the title of his latest project, an exercise
in association that combines texts and concepts from cinema, literature and music within
the same genre, terror and violence , with religious representations throughout history. The
result is a set of satirical drawings and paintings that, in addition to ridiculing the mystical
sentiment, constitute a kind of homage to the grotesque.

EDUARD ANTA
Born in Barcelona in 1984, he studied painting and sculpture at the Massana School of
Art and Design. Oil painting works mainly. Hyper-realistic, surreal, symbolic, fantastic and
dreamlike. Painter of detail, patience, memory, nostalgia, neatness. During quarantine, he
has done a pencil photocopy exercise.

ESTEBAN CORNACCHIA
Based on a fieldwork in the working-class neighborhoods, he develops a painting where
all the ephemeral artistic expressions appear that these contexts generate. Search the
urban landscape, the stories in the objects that end and begin. The theme is the city that
is overlooked as a context, taking its architecture as a starting point. It portrays urban art,
its graffiti, the textures, qualities, weight of materials such as iron, wood, cement and the
manifestation of the passage of time, its changes, mold, breaks, ruins. Urban archeology
and stories through things.

RAÚL GONZÁLEZ
The speciality of his painting in acrylic on paper, the theme of his work is fantasy genre,
He is inspired by worlds created by literature, comics and science fiction and horror films.
In his work he want to create an impact on the viewer either with the use of the color palette
or with images loaded with intensity, sometimes they are images where our reality can be
reflected but in a deformed way, I think by putting a point of realism in the fantasy genre it
is when the viewer really feels more attracted and identified.

MARGHERITA ALBANESI
Knotting and weaving for bodies and spaces. Margherita creates a world of textile objects,
from fashion accessories to tapestries, blending the tactility of textile art to the colourful
feeling of the mixed fibers and recycled materials she uses. Unexpected materials like
audio cables and other sorts of recycled objects blend with ropes, yarns, fabrics, branches
and metal bars in unique visual harmony.

CARLES GUITARD
Carles Guitart develops a graphic language in which geometry is essential to seek balance
in composition, creating works in which the compartmentalisation of space is at the service
of the work as a whole. The result are works that should make us think about the limit
between figuration and abstraction, using fragments of old canvases in which figuration is
still present, and that are juxtaposed in works that challenge the categorization of abstraction
and figuration. They are works made up of fragments of old canvases, parts of previous
works, the second life of paintings, canvases with a double life, parts of lived works, lives
divided into each fragment.