The Lights of the Stones, by Savina Tarsitano and Dinu Flamand

ESPRONCEDA > Events > Upcoming Events > The Lights of the Stones, by Savina Tarsitano and Dinu Flamand

The Lights of the Stones is a joint project by the Italian artist Savina Tarsitano and the Romanian poet Dinu Flămând. The European exhibition brings into light the “shadows” of Savina Tarsitano grown into lyrics in Dinu Flămând poems. On the occasion of the of the launch of the poetry book of Dinu Falamand “Ombres I Escullera” translated by Corina Oproae and Jordi Valls, during the Catalan Week Book on the 7th of September in Barcelona, the II International tour of the exhibition “The Lights of the Stones” will open at Espronceda, Institute of Art & Culture on the 10th of September. The exhibition is under the patronage of the European Culture Parliament.

The project is a metaphoric dialogue over cultures, a tribute to places, shadows which haunt the memory. “It is a wonderful proof that a lot of creative results come out when two creative artists meet and cooperate” (Ambassador Karl-Erik Norrman, European Culture Parliament).
“Essential meetings are rare. They are almost mystical occasions. They need something exceptional. Is it possible that two people meet and are able to dialogue with what they have most beautiful and hidden in their souls? It is the fact that two so different artists met and (re) met, and they agreed to make an exhibition of photographs together and a book of poetry is an almost mystical miracle”. (Valentin Protopopescu, Literary Review).

Savina and Dinu met in 2006, while in residence at the Bogliasco Foundation, Genoa, both selected to pursue their own project. Savina’s “shadows” were born there. The series later called “Icons of the Chaos”, inspired the poems written by Dinu Flămând. Their encounter and the mutual understanding of their poetic led to this successful project which has been traveling over several places since 2010, at the Galleria Ghiglione in occasion of the 15 years of activity of the Liguria Study Center, in Berlin at the Romanian Cultural Institute, then at the Academy of Romania in Rome and in Turin at the International Book Fair, in cooperation with the Romanian Cultural Institute in Venice, at the Italian Cultural Institute and the Romanian Cultural Institute in Brussels hosted by The Centre ,Edelman PR’s Brussels branch office. The exhibition had the patronage of the Bogliasco Foundation, the former French Culture Minister Frédérique Mitterand and of the European Culture Parliament. The Ambassador Karl-Erik Norrman – Secretary – General of the European Cultural Parliament, has been present in previous European tour events, opening the first tour exhibition together with Prof. Pasquale Pesce, former director of the Bogliasco Foundation, Dr. Magnolia Albertazzi, founding partner of the project Et in Arcadia ego. The opening event is an opportunity to discover and celebrate the poetry of Dinu Flămând who published “Umbre şi Faleze” by Brumar Timisoara and “La Luce delle Pietre” by Palomar,. Professor Giovanni Magliocco translated the poems from Romanian, Ombre e Falesie ed. by Rafaelli, Schatten und Klippen ed. By Klak Verlag illustrated by Savina Tarsitano.

“The story of the shadows, rich in anecdotes and original research, is intertwined with a variety of studies and disciplines that we would not consider at first: art, psychology, astronomy, neurology, are some of the fields in which the shadow has become subject to analysis and study. The works presented by Savina Tarsitano and Dinu Flămând are a tribute to the shadow, and consequently a praise of the light.” (Stefano Raimondi, curator).

The Shadows/Icons of the Chaos photography by Savina are maps of dislocation, a grammar of the islands, structures of optical communication. They possess the character of the relay post, represented not only by being geographical landfalls but also by the ever-present architecture of sighting, slightly removed from the landing places. It’s this quality, this ability to radiate energy, despite their apparent isolation, that has inspired my artistic works. When observing how the rocks, the stones, the walls are all so affected by the marine, meteorological and human events which are constantly modifying their shapes, She has perceived an energy, as generated by the continual movements of matter in nature. From this stems the project of utilizing rocks, stone walls and pavements as quadrants on which to cast the shadow of a human body, bringing out anamorphic visions, fed by the overlapping of shadow sections and the stone chromatic variations caused by natural chemical reactions. The shadows appear to me as the most suitable shapes because they possess contours both vanishing and dense, producing extraordinary results on the rock nervation, and also for their capacity to measure light, and to tell about time, its presence and going by. To mold the rocks, to make them alive, is to construct the islands iconographic mythology, made of dislocated landscapes, untraceable on an exact (literal) map. 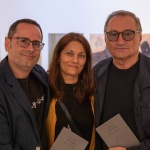 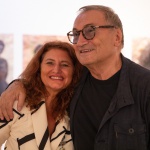 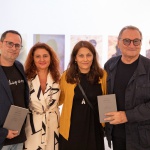 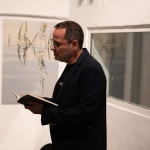 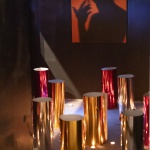 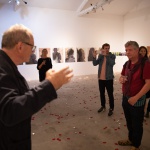 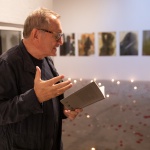 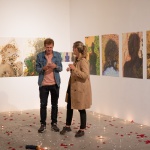 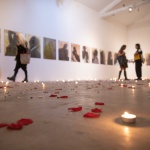 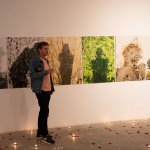 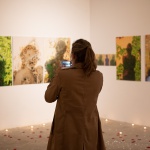 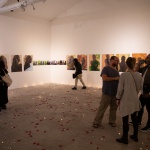 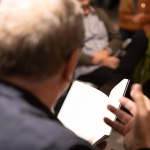 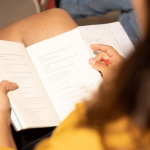 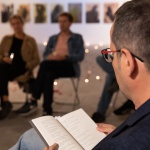 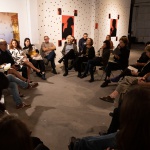 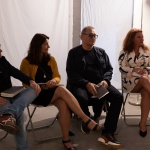 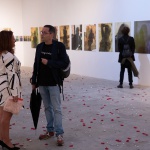 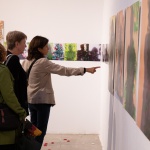