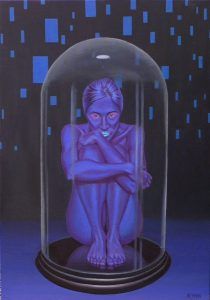 Emmanuel Beyens is a French and Belgian artist born in Paris and living in Brussels. After a fifteen year career as journalist for the written press and Belgian television, he decided in 2013 to entirely dedicate his life to portrait and depicting the human figure. His painting his strongly influenced by the memories of his childhood spent in several countries including Japan, Brazil, The Netherlands and Italy.

“In Brazil, I gained a fascination for bright colors and semi-precious stones. Italy has given me a taste for beautiful fabrics and classicism. In Japan, I experienced the endless search for perfection.” Emmanuel has studied at the Academy of Saint-Gilles in Brussels where he learned the basics of oil painting and perfected in the nude. He attended the studio of the Grande Espinette. and he has followed the course of the Flemish Classical Atelier in Bruges where he perfected in portraiture. Beyens creates portraits on commission as well as contemporary figurative paintings freely inspired and painted in an ultra chromatic style.

His work has been shown in several exhibitions organized by The European Commission, Montepaschi Bank, and TagGallery in Brussels In 2011, Emmanuel won the Grand Prix de Peinture at the Portrait International Fair (Château de Beauregard, France). His paintings are to be found in several private collections.