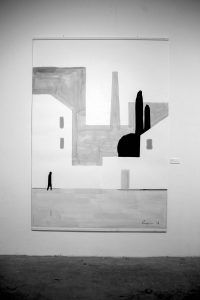 Evgeniy Stasenko is a Russian artist (born in Budapest, 1958), who at present lives in Barcelona. In 1985 he graduated from the Department of Fine & Graphic Arts from Moscow Pedagogical University, and his career as an artist and as an art teacher took off at the same time. In his early years of creativity, Evgeniy was enchanted by the process itself of creating whole universes on canvas, and his work was within the realistic tradition. After a certain artistic maturation, he developed his own style that balances the rationality of minimalism and pure emotion of expressionism in the intention to overcome the limitations of both.

His paintings are to be found in private collections in Russia, the USA, Greece, Germany, Switzerland, Italy and France.