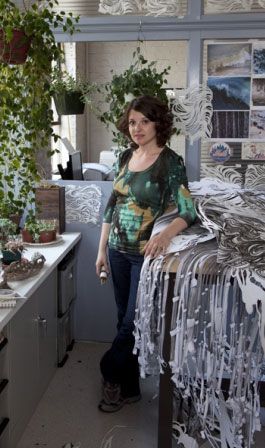 Since receiving a Bachelor of Fine Arts from Cornell University in 1996, Mia Pearlman has exhibited internationally in numerous galleries, non-profit spaces and museums, including the Museum of Arts and Design (NYC), Goyang Aram Gallery (South Korea), Smack Mellon (Brooklyn, NY), the Renwick Gallery at the Smithsonian American Art Museum, and the Manchester Art Gallery (UK).

Permanent commissions include large scale, site specific sculptures for Liberty Mutual’s headquarters in Boston, the 80th Street A Train station for the MTA in Queens, New York, and MGM Springfield in Springfield, MA, as well as paper installations and wall-hung paper sculptures for Leon Max (London) and PricewaterhouseCoopers (NY).

Her work has been featured in over 20 books on contemporary art, and in both international and domestic press, including The New York Times, New York Magazine, The New York Post, and The Boston Globe. Pearlman has also appeared on PBS Thirteen’s SundayArts, the Smithsonian Channel, Spain’s TV3, and NY1.

Pearlman has participated in many residency programs, including 20×24 Studio (NYC), Proyecto’Ace (Buenos Aires), Byrdcliffe (Woodstock, NY), the Lower East Side Printshop (NYC), and the Vermont Studio Center. In 2012 she was a Fellow at the Liguria Study Center in Bogliasco, Italy.

She received a 2011 Artist Grant from the New York Foundation for the Arts, the 2011 Robert Sterling Clark Visual Arts Space Award, which grants a free one-year studio space at The Marie Walsh Sharpe Art Foundation’s Space Program, a Pollock-Krasner Foundation Grant (2008), a Foundation for Contemporary Arts Emergency Grant (2008) and an Established Artist Fellowship from UrbanGlass (2009).