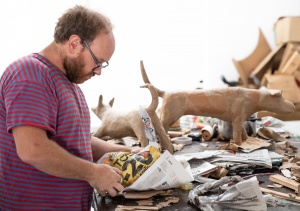 Tom Campbell is a Scottish born, Cork based, artist.

Tom is multi-disciplinary artist, who studied sculpture, but is largely self-taught. His visual art focuses on expressive drawing in which he works prolifically. His exhibition of 1,000 Drawings is testament to that. He paints and has a passion for papier mache sculpture, with animals often being the theme.

Tom enjoys the aspect of sharing his skills and working in groups, he has worked with many communities groups. A large focus in his community based work is ‘The Dog Project’, which has been run three times with the aim being to create 100 papier mache dogs and involve anyone who wished to collaborate.

Tom’s other creative outlets are music and performance, singing, playing the ukulele, guitar and harmonica he writes songs and has aspirations to record an album. In performance Tom is especially interested in clown, and mask work, and has a few solid circus skills including unicycle, juggling and walking on hands he has done a few one-man shows introducing various ridiculous characters, humour is a big part of Tom’s life and art.

Tom likes to dream of utopia, and  has a political side with an urge to have us live more in harmony with each other ourselves and the beautiful planet on which we live.

One thing is for sure, Tom won’t stop making art.