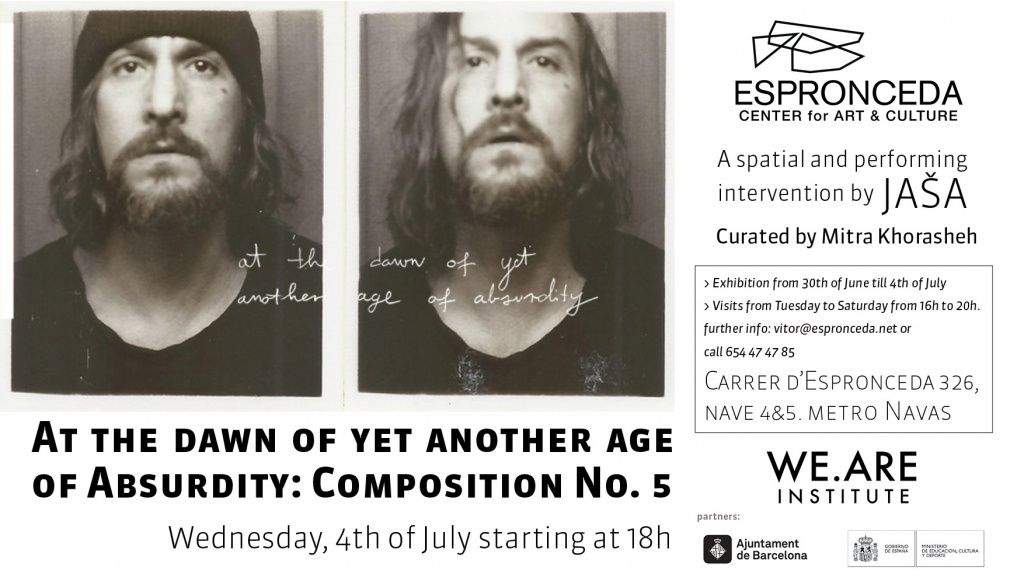 In light of our deep ambivalence about our global socio-economic situation, the question of the political commitment, in art and elsewhere, seems to be calling out for alternatives that do not shy away into the usual underground.The poetical, the individual act of defiance, a voice, sound, a repeating gesture as a poetical stance
and standing resistance. Composition No. 1, 2, 3 & 4 saw JAŠA unravel in New York City, Folkestone, Atacama desert and Zagreb on his own, what he did for six days a week, for 29 weeks, with a group of people, during the duration of the performance, the same issues, the same questions.
In essence, the composition remains the same: ephemeral, gestural, a form of resistance, only now reacting to a different context, as it molds in response to a delicate and menacing political climate. The core is an architecture of resistance, which manifests actions through presence and language. Actions and interventions are spread throughout the eight-day performance, reacting to the local, the temporal, a simplicity is fueled by the urgency of the now, a repercussion in time and space, we must recoil quickly, react to what is happening around us, being immediate and relevant.

There is tension under the surface. Egocentrism has swallowed us. Today’s rapidly changing day-to-day necessitates action, comment, responsibility, response. We are in an urgent state of ideological crisis that has resulted in the psychological breakdown of society. The situation needs constant attention, it requires reaction, as individuals and as different groups as a whole. All of it was there from the beginning; it now depends on which elements will surface through, which emotions will become the generator for a particular ideology. Art has always had the responsibility of being both a catalyzer and generator. Punk as an attitude was a reaction to a stiffening tissue of the era; Dada was significant opposition to boiling extremes that brought humanity to meet its most monstrous
side. In each inch of our bodies lies a potential disaster; as we are facing the most existential dilemmas on every step, each cell can decide to deteriorate and bring out the worst in us while we are dreaming of beauty. At times, it may be better to limit yourself than to continue the illusion of all accessible freedom, which ends in nothing less than limitless ego. A lake of me-s to drown in, a lake of us to love me.
Alternative forms of communication do exist; visual, musical, symbols, patterns – what we need are regular executions, to be exercised regularly. An exchange of situations creates the uniqueness of experiences. A Beuysian gesture in its potential to transform society. A simple exchange; a catalyst for hope. An act that will be what it is. Through repetition, gesture, and embrace, we reach the shores of ones most authentic self. In his recent
composition’s, JAŠA limits himself into a reverse situation – an honest way to face the self in front of self. Every thought can deteriorate. Every character can have many shades. A manifestation of a contrasting process that embraces aggression as emotion to give birth to the poetic. The obscurity of space reveals the preciousness of each gesture, gestures that parallel and overlap in time and space. All in one body, a dance with gravity. Now. It is
time to scream in the face of absurdity. Only together can we erupt and break free. Openness. A dense cloud of energy and spontaneity. When all is said and done, we transition into memory; we leave no trace.
All in one body we walk…

JAŠA (Mrevlje-Pollak, 1978) is one of the most prolific and influential contemporary Slovenian visual artists and the most prominent voice of the generation that with its educational process, art practice and project-related exhibitions has blown up the context of the domestic and foreign art scene and in this way secured visibility in the international art space. He has studied at the Academy in Venice (Accademia di Belle Arti di Venezia), where he graduated in 2004 with distinction and he obtained the second stage diploma at the same institution in 2007 (con elodee). Since 2008 he has headed the experimental training programmes at this institution. During his studies he was a member of the international art group Crash in Progress, a progressive and radical group that created an impressive reputation with art projects that aroused a great deal of attention. In 2005 he embarked on a completely autonomous path on which he has continued and created a diversified and multi-media practice, based on the principles of “site specific” interventions and the interconnectedness of creative processes with other participants. In the decade of the high rhythm of integrated projects, both alone and with several other renowned artists, he thoroughly transformed the art scene in Ljubljana and then continued in the same way in European project and
exhibition spaces, until his first independent exhibition in New York in 2012. In 2015, he represented Slovenia at the 56 th Venice Biennale, one of the most important events of the contemporary art world. Trained as a painter, he combined within the embryonic phase the isolation of creativity in the studio with collaboration with other artists and groups from diverse fields (from contemporary multimedia visual practices, architectural approaches and principles, sound art and music, and, last but not least, performance) in multi-layered and integrated projects, where he has put the relationship to the audience and with the audience at the true centre of artistic creation. After intensive and fruitful years of creation in the Slovenian and European art space, since 2013 he has lived and worked between Ljubljana and New York and continues to be a constant in the international art space.

The Composition series was established in 2017, curated by Mitra Korasheh.