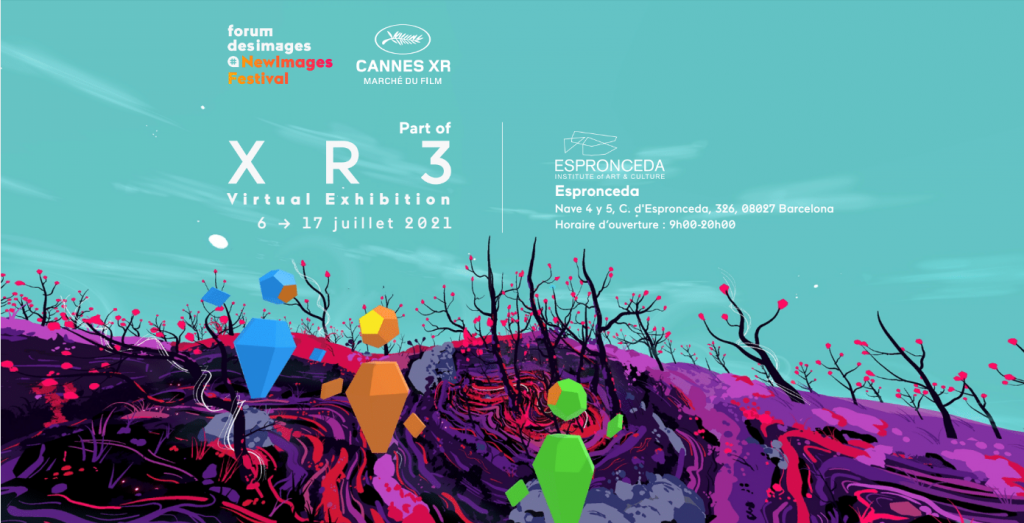 Leading international events in the field of immersive creation, NewImages Festival, Cannes XR and the Tribeca Festival are banding together to co – produce an innovative platform dedicated to VR and accessible to all audiences! A unique exhibition in terms of its stakes and its reach, XR3 will bring together around fifty works in virtual reality including many world premieres, resulting from the expertise and curation of each event to explore the field of immersive arts. All three VR selections will be ma de available at the Museum of Other Realities (MOR), a virtual exhibition space with inventive scenography, which has been specially designed for this momentous occasion. The full body of VR works will soon be revealed. As a hybrid event, XR3 will be able to present an exciting line – up of VR works to a worldwide audience via several modes of access:

● for people with a VR headset: online access, through the MOR app (available on the platforms Steam and Viveport )

● for everyone: onsite access in the context of all three events, as well as access to VR stations set up by our partners across the world. Thanks to this unprecedented partnership, NewImages Festival, Cannes XR and Tribeca Festival are delighted to make VR and the latest immersive creations easily accessible to journalists, professionals and the general public – onsite or virtually
– wherever they are! Three viewpoints on VR creation for a common commitment

This approach is fully in line with our strategy of bringing together and federating a whole range of key partners around the world in order to promote a common and unbounded access to XR creation, to the benefit of the works, the artists, and of course, the audiences.

“We are thrilled to join forces with prestigious partners like Tribeca and NewImagesFestival tosupport the whole XR community and create one of the most ambitious virtual exhibitions inaddition to our physical event in Cannes this year,”saysGuillaume Esmiol, Deputy DirectorofCannes’ Marché du Film.“Cannes XR will thus take placein two parts. Starting June 9th, we will introduce “XR3,” aspecially-designed VR environment to showcase the best VR narrative content. Then from July6th-15th, Cannes XR will benefit from the momentum of the Marché du Film at the Festival deCannes by connecting the cinema industry with the XR community. Not only will we bedemonstrating “XR3,” but there will also be networking events and inspiring conferences withtop speakers.””We are so excited to work with Cannes XR and NewImages Festival to present the XR3platform this season at the Museum of Other Realities,” saidLoren Hammonds, VicePresident, Immersive Programming of theTribeca Festival.“It’s especially poignant in this year of transition to be presenting our 3 separate curationsunder oneumbrella for at-home audiences. We are so encouraged by the growing number ofVR enthusiasts globally, and we can’t wait to launch this amazing new work to the world inJune.”

The 20thedition of the Tribeca Festival will take place from June 9 to 20 with live in personprogramming at venues throughout all New York City boroughs.4

The MOR, a Museum in virtual reality

Accessible to those who own a virtual reality headset:from June 9 to 20 and from July 6 to 15, 2021.With the MOR (Museum of Other Realities), a gallery specialized in the exhibition ofinternational VR artists, the participants will be able to discover a unique venue and accessthe full body of works offered by NewImages Festival, Cannes XR and Tribeca. The integralityof the program will be available through theMOR appwhich can be downloaded starting June9 on Steam and Viveport. The full body of works will remain free to access 24/7 until June 20and from July 6 to 15.

About NewImages FestivalDedicated to digital creation and to virtual worlds, NewImagesFestival combines a rich professionalcomponent with a program open to all audiences. With prizes at stake, its international XR competitionis submitted to a jury of creators and professionals. Its XR Financing Market brings together leadingactors in the XR industry around a selection of projects open to all immersive formats. The festival alsosupports immersive creator and its industry by initiating collaborations, under the form of VR creationresidencies, with other countries and regions of the world, such as Taiwan (Kaohsiung Film festival andTAICCA) and Africa.

NewImages Festival is produced and organized by the Forum des images, the cultural institution of theCity of Paris, dedicated to cinema and digital creation.

Cannes XR is the Marché du Film’s program dedicated to immersive technologies and cinematographiccontent. Taking place annually during the Festival de Cannes, this unmissable rendez-vousoffers amultitude of networking, financing and distribution opportunities for the entire XR community: artists,directors, independent producers, studio executives, leading tech companies, location-based and onlinedistributors. Designed as a global networking platform to discuss the role of XR technologies, CannesXR is here to inspire the art of storytelling and fuel the future of film.

The Tribeca Festival, presented by AT&T, bringsartists and diverse audiences together to celebratestorytelling in all its forms, including film, TV, VR, gaming, music, and online work. With strong roots inindependent film, Tribeca is a platform for creative expression and immersive entertainment. Tribecachampions emerging and established voices; discovers award-winning filmmakers and creators; curatesinnovative experiences; and introduces new technology and ideas through premieres, exhibitions, talks,and live performances.The Festival was foundedby Robert De Niro, Jane Rosenthal, and Craig Hatkoff in 2001 to spur theeconomic and cultural revitalization of lower Manhattan following the attacks on the World Trade Center.Tribeca will celebrate its 20th year June 9–20, 2021.In 2019, James Murdoch’s Lupa Systems, a private investment company with locations in New Yorkand Mumbai, bought a majority stake in Tribeca Enterprises, bringing together Rosenthal, De Niro, andMurdoch to grow the enterprise.