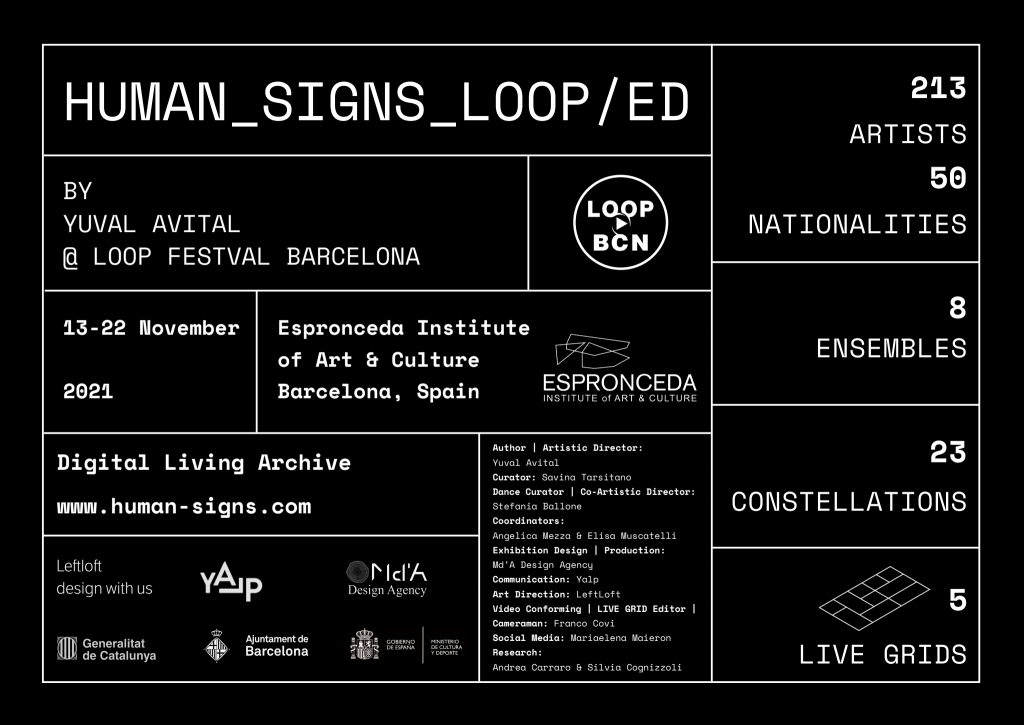 For the first time since its creation, the monumental artwork by Yuval Avital that brings together more than 200 artists from around the world will be presented at ESPRONCEDA Institute of Art & Culture on the occasion of LOOP BARCELONA: CITY SCREEN 2021, one of the most important festivals ofvideo art in Europe held in Barcelona every year.

An art anomaly, not produced or commissioned by any entity, but desired by the artists themselves. Born during the COVID-19 seclusion, interpretingthe viral aesthetic of this unique historicalmoment, HUMAN SIGNS has gathered till now over 200 performers from 50 countries, each proposing adeep individual art-testimony which converges into a powerful expressive multimedia fresco. Yuval’s 12 minutes vocal art testimony, auto-filmed during reclusion, expresses his most intimate state andbecomes a fundamental layer to which all artists relate to as a timeline, musicality and intensityguide (Similar to the Renaissance concept of Cantus Firmus), allowingby this method potentialinfinite interconnections between all participants, creating choirs, Ensembles, Constellations and intimate dialogues. Bringing a deep sense of togetherness, HUMAN SIGNS aims to overcome physicaldistance and isolation therefore,it invites us to explore differently the spaces, languages, andforms of interconnection, as part of a collective reflection on a unique historical time. HUMANSIGNS was presented online as a multimedia artwork through the Living Digital Archiveand offline through LIVE GRID performances in five different cities around the world (New York, San Petersburg,Tel Aviv, Milan, Turin).The exhibition leads the visitors into the HUMAN SIGNS universe through three chapters. The firstelement will be animmersive polyptychof seven parallel projections, in which a constant flow ofthe artists’ auto-filmed performances creates an ideally infinite ensemble. The second element of the exhibition allows visitors tovirtually meet the artistsand listen directly to all thedifferent emotions they experienced while participating in the performance, and to view the LIVEGRID performances that took place in the past months around the world. The third element is anexperience room, in which each visitor is able to engage completely with the artwork as a performerusing their voice and body in dialogue with Yuval Avital’s cantus firmus. The exhibition will also host a new LIVE GRID involving artists from Barcelonain dialogue with the surrounding videos.

Stefania Ballone: She graduated at “Scuola di Ballo del Teatro alla Scala”, from 2000 is part of thetheatre’s corps de ballet, where she participates in all the season’s productions, also interpreting soloroles. While dancing at the Teatroalla Scala, she is constantly involved in choreographic projects fortheatre for several and different movement expressions. She participated at the Positano Prize, 2006 and atthe Venice Biennale Dance Festival in 2007, as a dancer and assistant of the choreographer FrancescoVentriglia. In 2011, she graduated in Modern Literatures at Università degli Studi di Milano, and alsodebuting with her first choreographyPer una voltaat Parma Royal Theatre. In 2014, she graduated with aMaster in Sciences of Theatre and Performing Arts at Università degli Studi di Milano, with a thesis onBallet at the Teatro alla Scala in the Nineties. She curated the artistic show at L’Aia di San Giorgio,Vignacastrisi;Prima che si fa note,pianoforte e danza per resistere albuio, 2020; the choreographyLaValsefor the Teatro alla Scala’s corps the ballet,2017; the direction and choreography for the showtreD:Design, Danza,Disability, Design Triennale, 2016;the choreography of the 30st edition ofMilanoltreFestival, 2016. She participates as dancer inAlter balletto, showShortcutby Emanuela Tagliavia,2020;Dresden Biennale, 2019;Nothing to sell,MacroMuseum, Rome, 2019;Foreign Bodiesby Yuval Avital, FondazioneFabbrica del Cioccolato, Switzerland2017. In 2019, she starts an artistic collaboration with the pianistFrancesco Libetta. Among her prize: Dance Prize, Siracusa; Perugia International Dance Contest; VolterraDance Prize, 2011; Europa in danza Prize,2016; Mads Price for Dance in Salerno, 2019; theChoreographyContest’s final in Sens with her pas de deux Thunders and lightnings, 2018.