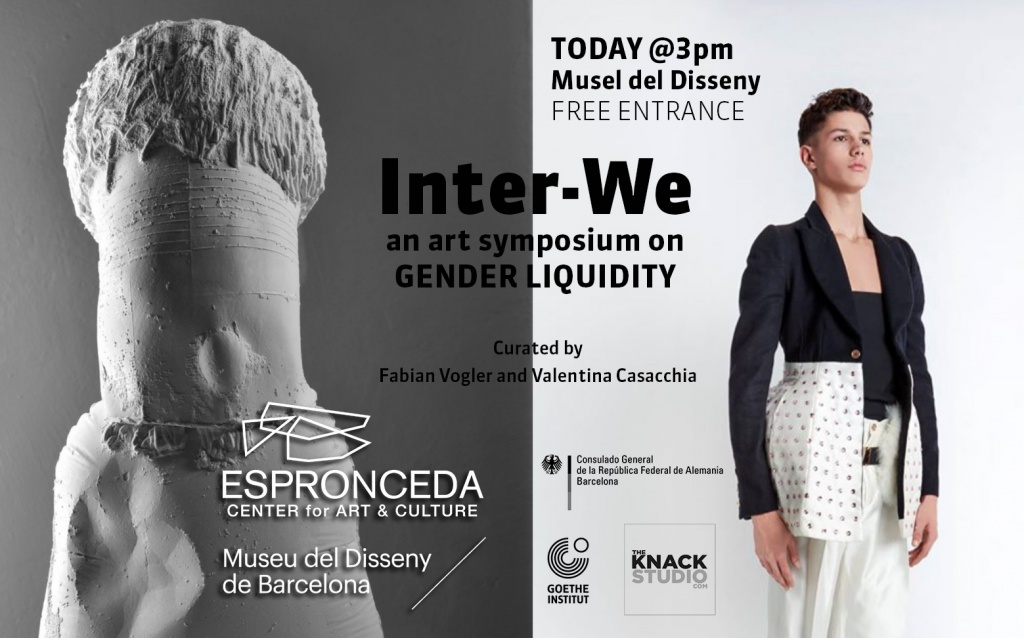 On Tuesday, January 30, 2018, from 3:00 p.m. to 7:30 p.m., the ESPRONCEDA CENTER for ART & CULTURE and the Barcelona Design Museum present INTER_WE, an artistic symposium on LIQUID GENDER, curated by Fabian Vogler and Valentina Casacchia.

The Design Museum hosts Inter-We, a symposium on gender fluidity

INTER_WE reflects on the changes in today’s society regarding gender diversity. The existence of intersex people proves the falsity of the binary construction of gender. If we stop dividing people into men and women and start thinking about human beings, gender controversies are diluted. We have stopped including race and religion in the passport, deleting the gender from the passport should be the next step. An example is that of German law – a change to add a third gender to the two traditional feminine / masculine options.
The visual arts have always had the ability to reflect a contemporary vision of the human being and to ask new questions such as, can intersex people find their place in today’s dichotomous world? Can people who “fit” to a gender defined as masculine and feminine analyze the social construction of gender and propose alternative concepts to the traditional binary system of classification? And finally, do museums adequately represent this diversity?

The symposium aims to contribute to making the variety of genres understandable, a diversity that must be seen, rather than as a threat, as a gift. The concept of liquid gender, as a reflection of the liquid society analyzed by Zygmunt Bauman, wants to overcome the gender division in masculine and feminine, and the roles and stereotypes that these have been associated with for centuries.
The sessions are organized by Valentina Casacchia and Fabian Vogler, and moderated by Sílvia Ventosa, curator of the Design Museum. The speakers come from disciplines apparently as far apart as art, fashion, literature, biological science, sociology, or psychology. Manuel Aramendia, Inga Becker, Begoña Enguix, Stefan Horlacher, Marisol Salanova, Katinka Schweizer, Patricia Soley-Bertran, Sílvia Ventosa and Simon Zobel will contribute with unpublished conferences.