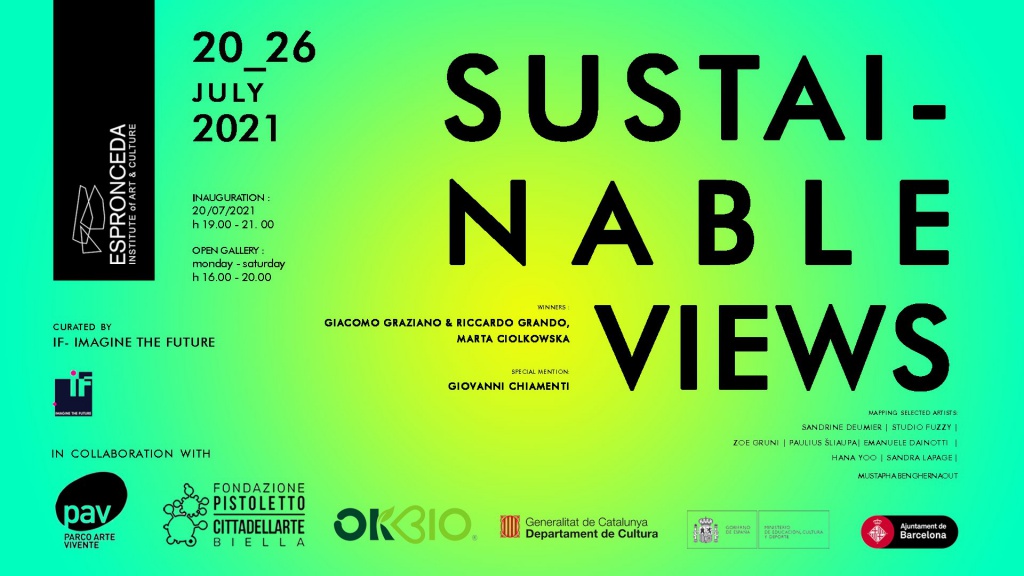 Curated by: IF – Imagine the Future

Espronceda – Institute of Art and Culture is pleased to present the exhibition “Sustainable Views”, curated by IF – Imagine the Future, based on the homonymous open call (Dove lo Getto)
addressed to artists active in the field of video art and interested in offering a vision creative on the theme of environmental and social sustainability. The project was born thanks to the collaboration between International Istitutions: Turin, Biella (Italy) and Barcelona (Spain): Cittadellarte – Fondazione Pistoletto, PAV – Parco Arte Vivente, Espronceda – Institute of Art & Culture, Ok Bio, IF.

The “Sustainable Views” exhibition is presented as one of the prizes offered to the winning artists of the open call, to which the collaborating bodies have decided to support eight other artists deemed worthy of exposure. The intention to enhance those works of video art and virtual reality that show a profound reflection on the theme of sustainability. The artists, each with their own creative and expressive language, through their works intend to raise awareness on the theme of environmental and social sustainability through different approaches: critical, utopian or proactive. The works on display thus offer a broad reflection on climate change, on the need for responsible recycling, on the safeguarding of the natural ecosystem and on a post human, zoegalitarian and ecofeminist vision of the future. In this era characterized by anthropocentrism and urgent climatic crises, art assumes more than ever an important educational and ethical role through which to read the current environmenta history and at the same time become a form of profound expression, an engine of awareness and change, to lead to the emergence of resilient behaviors towards current ecological problems.

The author of Bottlefield was awarded the UNIDEE Residency, promoted by Cittadellarte – Pistoletto Foundation, one-week art residency; the authors of Against the Tide, on the other hand, will receive the Workshop Award, promoted by Parco Arte Vivente, which includes participation in a workshop conducted by the artists featured in the PAV art program, with the presentation of their work at the Parco Arte Vivente. The two winning works, together with the honorable mention Overlayed Symbiosis by Giovanni Chiamenti, are presented at Espronceda, Institute of Art & Culture in Barcelona and at Cittadellarte-Fondazione Pistoletto on October 30 on the occasion of Arte al Centro. 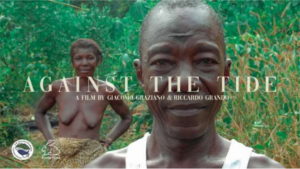 This is the story of the Environmental Foundation for Africa, an organization born in Sierra Leone in opposition to the dramatic social and climatic events in the country. Despite a nearly ten-year civil war and a more recent Ebola epidemic affecting thousands of people, EFA has always tried to be there for the community by introducing green programs. Through the words of the founder Tommy Garnett, the documentary tells the challenges and events from 1992 to the present day.

Riccardo Grando has a degree in Arts, Music and Performing Arts. As a director, editor and operator he has had various experiences in the field of communication and video-marketing through his professional training with important agencies and companies in Northern Italy. Today he works as a videomaker for Treedom Italia. 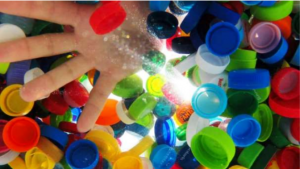 Humans have used weapons for too many years to kill each other. But it seems that they have adopted, more and more in recent years, another invention born to help people in their common life: plastic. A material that has turned out to be a weapon, even more powerful than bombs and guns, a “plague” that slowly affects the whole of humanity. In the “Bottlefield” video, we find ourselves underwater, as if we are swimming and looking up at the sky, when suddenly we begin to see bottle caps, vigorously landing on the surface of the water. Just like real bombs, the scene gradually fills with plastic caps, which (increasingly) restrict the view and reduce the last rays of sunlight that penetrate through them. We hear a frantic noise, then a loud crash that makes the imposing plastic mass move towards the bottom, when immediately after we see a hand rummaging in the pile of bottle caps that descends more and more to the bottom dragging us to the surface. With the video “Bottlefield” important questions are posed to which the human being must necessarily answer and find, with diligent care and actions, valid solutions to avoid their disappearance and definitive extinction.

Marta Ciolkowska has a Masters in Interior Design from the Strzemiński Academy of Fine Arts in Łódź (Poland). She deals with graphics, sculpture, video and installation. She had the opportunity to collaborate with Polish and Italian artists such as Piotr Janowski, Marinella Senatore, Alosha, Francesco Di Giovanni. She is present in numerous catalogs and publications of exhibitions and artistic events. 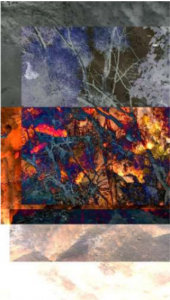 “Overlayed Symbiosis” reflects on the role and behavior of man within his ecosystem, as an entity determined by a dynamic and complex system of relationships and interdependencies, starting from the concept of “sympoiesis” analyzed by Donna Haraway. Human beings as compost must coexist and coexist with other earthly creatures by making relatives, that is, establishing symbiotic bonds that could be useful in regenerating the fracture with nature caused by them. Compost means worldliness. Not everyone carries the same weight within it, there are those who are more responsible than others in this incessant work of composition-decomposition. To live together on our planet we do not need antagonism but rather tuning; no tunnel vision but rather multifocality; no alienation but rather symbiosis. There is no longer a distinction between host and parasite.

Giovanni Chiamenti holds a master’s degree in painting from the Brera Academy of Fine Arts in Milan. He has exhibited in several group exhibitions in Italy and abroad and has participated in workshops with international artists including Jorge Peris and Mathieu Bernard-Reymond. In 2018 he was in residenc at the School of Visual Arts in New York and among the finalists of the Francesco Fabbri Prize for Contemporary Arts. In 2019 he inaugurated his first solo exhibition at spazioSERRA (Milan, IT). In 2021 he was ranked second in the Exibart Prize and inaugurated two solo exhibitions in the spaces of the Daniele Agostini Gallery (Lugano, CH) and the Marrocco Gallery (Naples, IT).

Espronceda – Institute of Art & Culture: is an innovative center of contemporary artistic production founded in 2013 in Barcelona. Espronceda offers an international platform and a multidisciplinary environment for artists, curators and all those who believe in the importance of art, culture and education. The center promotes established and aspiring artists and accompanies them to develop their projects and creativity and to spread inspiration beyond their physical permanence in space.

Cittadellarte – Fondazione Pistoletto: is an artistic and cultural foundation dedicated since more than 20 years to the study, experimentation and development of practices for responsible social transformation through direct interaction with art.

PAV – Living Art Park: it is an experimental center of contemporary art, a meeting place and laboratory experiences aimed at the dialogue between art and nature, biotechnology and ecology, between the public and artists. IF Collective: deals with the study, design, curation and preparation of exhibitions, events and artistic-cultural activities with the aim of informing and sensitizing citizenship on environmental and social issues of importance in an innovative way.

Ok Bio: a new brand focused on disposable compostable products for the catering industry, in line with the new European policies regarding single-use plastics.