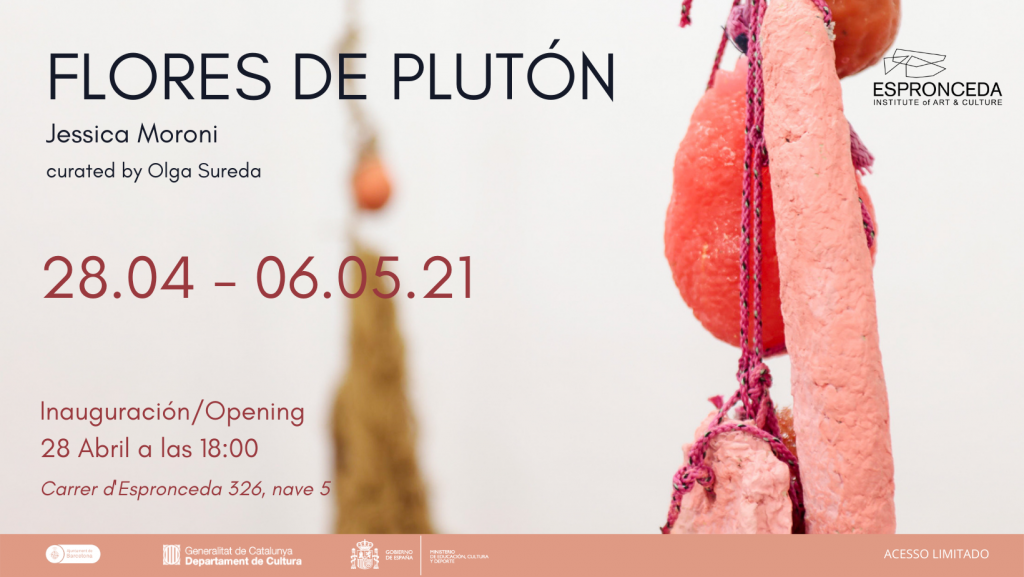 Jessica Moroni seeks with her works, with her drawings and sculptural pieces of large dimensions that to the eye become fragile and disturbing in their forms and intense in their chromatism, the reconnection with nature and the natural environment.

In Flores de Plutón, the author creates a cosmic place, without taboos, a place that speaks of a generational crisis, of the sacred, of fertility, of sexuality, of cycles, of changes, of personal and global transformation. Moroni proposes new paths of transformation that invite us to reconnect with Nature, the Earth and its Cosmos from empathy and consciousness with the will to awaken a collective reflection.

Book a place on Eventbrite

In periods of crisis, where one navigates with great uncertainty, artistic creation usually responds to both personal and collective life challenges. These are moments that reflect a change, an end and a new beginning, a destruction that gives way to a transformation and regeneration not only of oneself but also of a collective, just as it happens in nature and in its cycles, or in astrology.

The human being is nature and art. Her being is nature and her “human” is art, an art that presents, that represents, that symbolizes, that converts the daily ritual of living in nature into a myth – but which, with or without art, can also at times be wild, destructive, uncontrollable and untamed. While people can influence Nature for better or worse and receive from it not only its benefits but also life itself, sometimes Nature rebels against human beings – just as, paradoxically, society itself rebels – and can erode or condition the future of the weakest, of the most exposed generations, of those who have not yet been able to access or build their own castles, even though they be made of straw or glass.

Jessica Moroni belongs to that generation, which has lived through successive economic crises and crisis of values, for which the social order is somewhat ambiguous. A generation that, because of its precarious condition, is in a constant state of uncertainty and that seeks a global transformation that starts with the personal.

Today, as a result of the disconnection of the natural processes of our bodies and our environment and the concern for the conservation of nature in the face of the serious problem of its permanent deterioration, a collective conscience is arising, represented by a series of artists who seek to inhabit the Earth more peacefully – in a dynamic rather than static way, reconnecting with the sacredness of nature and the natural environment.

In Flores de Plutón [Flowers of Pluto], Moroni wants to make a pact with the earth. Not the earth of the Earth, but the earth of Pluto, a tiny, icy and distant planet – historically young – which owes its name to Hades, the god of the underworld, which the Romans associated with Dis Pater, an agrarian and positive god, the giver of all kinds of riches – physical, material or symbolic – such as the material, allusive and aesthetic richness of flowers. A Janic god that in astrology symbolizes spiritual and transpersonal power, regeneration and transformation after destruction.

The artist, who moves in a society increasingly sunk in the hells of the ancient evil Hades (whose inhabitants were denied the possibility of returning to the fertile land) – a society of cement, asphalt and plastic – reclaims in Flores de Plutón the planet-symbol Pluto, lord of the inexhaustible riches of the Earth. Jessica Moroni seeks through her works – with her short stories that narrate the history of that generation in crisis (hers and ours), with her drawings and with her large-scale sculptural pieces that when seen become fragile and disturbing in their forms and intense in their chromatism – the reconnection with nature.

The approach to and coexistence with nature are sources of inspiration for the artist, and this is how – through an intimate process in which she explores and observes the properties of residual matter, bother organic and inorganic, as something alive that can be recycled – these floating sculptures emerge. Moroni collects this matter and then manipulates, appropriates, and repairs it, and these sculptures are in continuous transformation, dying and being reborn, mutating and regenerating themselves. Soft and organic forms that are transferred to a two-dimensional plane with her drawings, the result of her creative process and interest in the morphology of organisms that share color, content and form.

Jessica Moroni dialogues and interacts with the Earth, but also with the Cosmos and the Microcosm. Rather than being interested in the stillness or silence of the absolute physical and metaphysical reality, it is its processes, its transformations, its movements, and its interactions that she works with.

As, for example, the cycles or flows, whether lunar or menstrual, that give real or symbolic life to her work, inspired at the same time by forms that are symbols of fertility, such as the uterus, also known as the womb. The artist puts in parallel the fact that Nature, by essence, nurtures, cares for and welcomes the human being with the fact that the woman (the mother) also shelters, nourishes, and protects her. And this leads her to the encounter between feminism and environmentalism, and, consequently, to eco-feminist theories, which redefine who we are as humans based onthe analysis of how gender roles determine us and what should be our relationship with Nature in the century of climate change and ecological crisis. With this, Moroni reflects not only on the absolute need to pamper Nature or to do one’s bit, however small it may be, but also on how to convert through art the nature that is constantly under attack into a Nature loved by human beings.

In Flores de Plutón, Jessica Moroni creates a cosmic place, without taboos, a place that speaks of a generation in crisis, of the sacred, of fertility, of sexuality, of cycles, of changes, of personal and global transformation. Moroni proposes new paths of transformation that invite us to reconnect with Nature, the Earth, and its Cosmos from empathy and consciousness with the will to awaken a collective reflection. 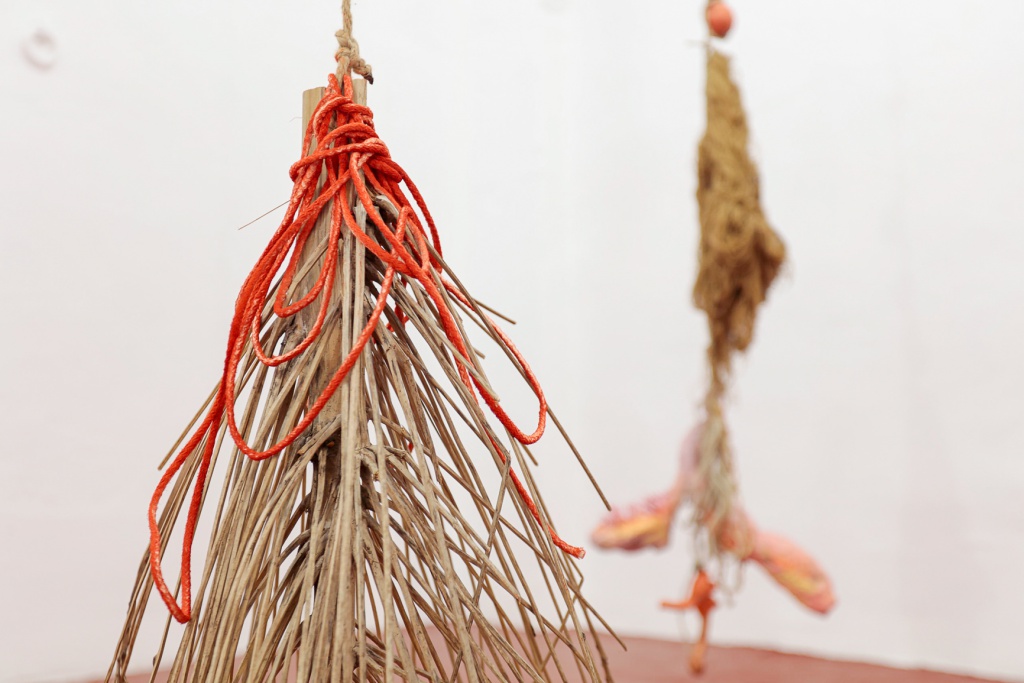